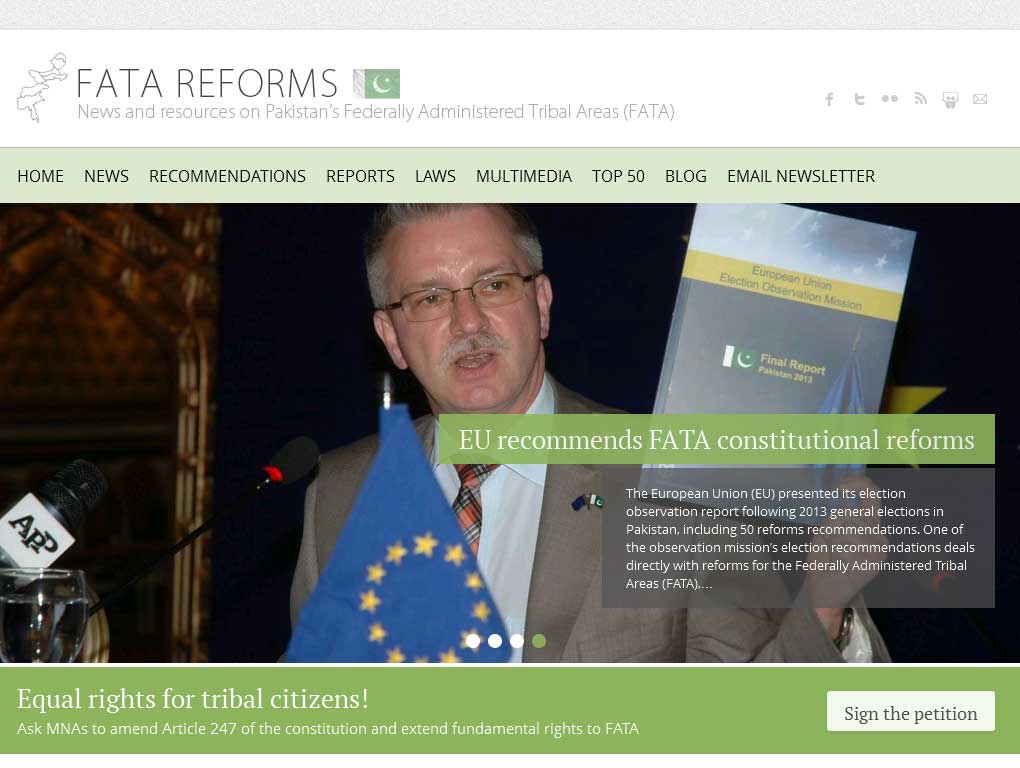 PESHAWAR: Tribal people were greatly shocked to see an advertisement of a website Fatareforms.org, which is launched by a foreign NGO and is related to the Tribal Areas of Pakistan. The launch of this website was also astonishing news for high ups of the security agencies, Governor Khyber Pakhtunkhwa and the FATA Secretariat.
The most important thing about this advertisement was that the sponsors of this website did not mention their identity anywhere in the advertisement.
Another very important thing about this website is that nowhere in the world the governments allows foreign NGOï¿½s to start a website with regard to a specific area or population (race) of that country.
A source in the security agency on condition of anonymity said that if such websites are allowed in Pakistan, then separatist movements in Balochistan and terrorists organizations in FATA will also start making such websites.

He further said that keeping in view the sensitive situation of FATA, such website will create a network of their own intelligence operators whereas fake and malicious stories will also be uploaded on such websites to defame Pakistan on international level.
Another government official while talking to The Frontier Post said that Pakistan Telecommunication Authority should immediately take action against this website and be immediately banned on the internet.
It is something amazing that a foreign NGO initiated this website related to FATA Reforms without any coordination with the KPK governor who is the most responsible authority with regard to FATA.
Public Relation Officer of the Governor KPK, Mohammad Haroon when contacted by The Frontier Post said that he had no information regarding the launching of the site.
After office of the governor KPK the second most important authority with regard to FATA is the FATA Secretariat.
When The Frontier Post contacted DD Information FATA Secretariat, Fazl Ullah, he categorically said that he had no information about launching of this website.
It is high time that our government machinery learns lesson from the past thirteen years experience with regard to FATA and one such lesson was that our own media should first start coverage and reporting of the Tribal Areas of Pakistan instead of allowing foreign NGOï¿½s to do reporting about our people, country and territories.