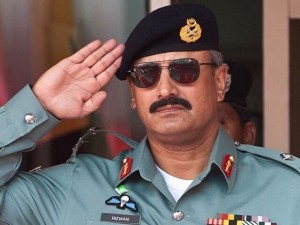 F.P. Report
PESHAWAR: Managing Editor of The Frontier Post, Jalil Afridi has written a letter to Director General, Inter Services Intelligence (ISI), Lieutenant General Rizwan Akhtar with regard to former officials of ISI who are bent upon destroying a patriotic newspaper, The Frontier Post.
In his letter dated 17th March 2015, addressed to the DG ISI, Managing Editor of The Frontier Post has mentioned names of former official of ISI, Omar Jawaid Gandapur who was posted in Peshawar in its legal desk and another individual namely Major (R) Javed Iqbal. Jalil Afridi in his letter has stated that both these individuals are involved in defaming the armed forces by using their name in different illegal activities and that they are also causing huge financial loss to The Frontier Publications Private Limited, under which The Frontier Post operates.
Regarding Omar Jawaid Gandapur, Jalil Afridi in his letter stated that Omar Jawaid Gandapur is son of former judge of Peshawar High Court who has illegally built his law chamber office on a property in Lahore which is owned by Jalil Afridi and his brothers and a police guard is also placed there. Jalil Afridi letter further said in his letter that \”this police guard is provided to the former judge by the government of Pakistan for his personal security and not for deputing on someone elseï¿½s property.\”
The Frontier Post Managing Editor has also mentioned in his letter that since last one year he has been facing members of banned terrorist organizations, drug dealers, land mafia and private lenders (sood khores) who are bent upon damaging his company and properties. Regarding one individual who has been an active member of banned terrorist group of Khyber Agency, Jalil Afridi in his letter stated that the said individual forcibly tried to take possession of one of his properties in Peshawar and video recording evidence was provided to the CCPO Police Peshawar in this regard but till date no action has been taken against that person.
Jalil Afridi in his letter requested the Director General ISI for conducting an inquiry to the facts that he has mentioned in his letter. He also requested that more than two hundred staffers who are associated with The Frontier Post should be saved from destruction and should be allowed to continue their work in peaceful manner.