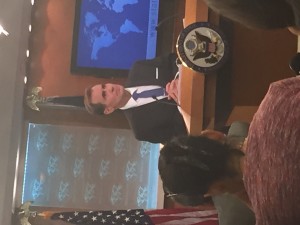 Comment by Jalil Afridi
I don’t really know how many journalists from Pakistan have attended the daily press briefing at the State Department in Washington D. C  but indeed I felt honoured being present there among journalists representing big media groups from around the world.
It wasRear Admiral John Kirby who is the spokesman for the State Department of the United States briefing the journalists and answering variety of questions related to issues from all over the world.
For me as a Pakistani, the most punching aspect  was an Indian journalist asking questions about Pakistan. His first question was whether America has any objections to China Pakistan Economic Corridor where as his second question was whether America will be taking any action Pakistani nuclear programme as according to him Pakistan was not capable of keeping its nukes safe from falling into the hands of some terrorists groups.
I can imagine that such questions are a routine matter by Indian journalists in the daily press briefing at State Department and unfortunately there is no body from Pakistan to ask questions about Indian estrocities in Kashmir, Indian support to different terrorist groups in Afghanistan, the tribal areas of Pakistan and Balochistan.
Though I raised my hand several times to ask questions about issues related to India but being visiting guest journalist I suppose I was not allowed to ask questions.
The kind of situation Pakistan is facing at present times requires Pakistani media to be present at all international media forums in order to raise issues about the challenges Pakistan has facing for the last decade.
The kind of proxy wars India has been indulging in last many years has put the entire South East Asia in trouble. No neighbour of India is happy with its undue interference in their internal matters. Whether it is China, Pakistan, Afghanistan, Sri Lanka, Nepal or Myanmar, each and every country has it complaints from India.
For Pakistan it is an important junction of time where it must ensure its presence at all international forums explaining the challenges it is facing. Beside the dark sides of Pakistan there are beautiful aspects  to our country as well and unfortunately we as a nation have miserably failed in displaying the positive sides of people and the country.
It is time that Pakistani rulers and our citizens wake to the challenges we are facing and work towards ensuring a bright future for our generations to come. Media in Pakistan is as equally responsible as its rulers in playing its due role for ensuring a stable and peaceful Pakistan.
« Back bone of terrorists
Obama announces new hostage policy »