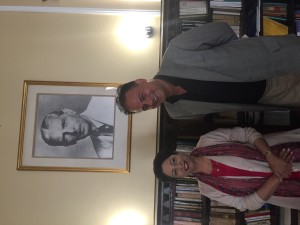 Pak-Iran gas pipeline to go ahead

Jalil Afridi
New York: Pakistan’s Ambassador to the United Nations (UN), Dr Maleeha Lodhi told The Frontier Post that Pakistan enjoys much respect at the UN for its longstanding contribution to UN peace keeping operations. Today it is among the world’s top two troop contributing countries with almost 9,000 troops deployed in different UN missions, mostly in Africa.
In an exclusive interview with The Frontier Post, Dr Maleeha Lodhi said that the upcoming 70th anniversary of the United Nations in September this year will be very special because over one hundred and fifty eight heads of states will be coming to New York to attend the General Assembly session. Regarding the session, she said that Post 2015 development agenda will be adopted during the summit and Sustainable Development Goals will be set for the next fifteen years.
Dr Lodhi said that in September Pakistan will be co-hosting a summit along with the United States and other countries peace keeping. She also said that China will be hosting two summits on the subjects of South-South Cooperation and the Women’s Empowerment.
She highlighted the importance of the China Pakistan Economic Corridor (CPEC) and said that after completion of the project, not only Pakistan and China will benefit from this but the entire region will also gain advantages. Dr Maleeha Lodhi termed CPEC as “win-win project for the whole region.”
When asked about the billions of dollars heroin trade from Afghanistan and the support to terrorists by those involved in this drugs trade, Dr Maleeha Lodhi termed the drugs trade as “fuel for terrorists” and said that Pakistan  has suffered in many ways due to the spillover of this with a large addict numbers now in the country. She said that Pakistan continuously raises this issue at the United Nations and assured that she will personally pursue the issue to ensure that stronger mechanisms are evolved to to stop the flow of drugs in the region.
Answering a question with regard to Afghan refugees, Dr Maleeha Lodhi said that although ultimately all Afghan refugees are supposed to return to their own country but on humanitarian and compassionate grounds their stay has been extended. She said Pakistan has played an exemplary role in hosting refugees for over three decades.
Dr Maleeha Lodhi welcomed the recent nuclear deal with Iran and hoped that this will also contribute to regional stability. When asked taht  sanctions on Iran will be lifted after five years and how she sees the future of the Pakistan-Iran gas pipeline, Dr Maleeha Lodhi said that the said the project was always going to go ahead.
In reply to a question about UN criticism of Pakistan about executing death penalties, Dr Maleeha Lodhi said that this is a domestic and sovereign matter of Pakistan and  many countries in the world including America have the death penalty.
« Dialogue with Taliban in Murree most significant
US not aware of Russia-Saudi nuclear deal: Kirby »