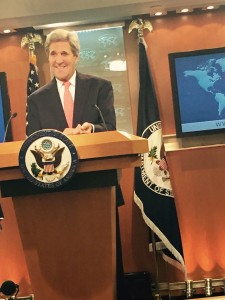 Jalil Afridi
Washington DC: US Secretary of State, John Kerry has said that for any country to succeed it is mandatory to allow followers of every religion to practice their rituals in peaceful manner.
While announcing and releasing the Annual International Religious Freedom Report of America, Senator Kerry said that every country must provide legal equality to all religions especially if they wish do have cordial relation with America. He said that due to non state actors and terrorists groups such as Daish, Al Qaeda and Boka Haram many innocent human beings are killed on pretext of their religious beliefs.
Senator Kerry urged China, Saudi Arabia, Iran,  Pakistan and Burma to protect followers of different faith and especially urged China and Burma to release those who are in prison on different religious charges.
With regard to a question about banning Muslim women wearing hijab, he said that the beauty of America is that it allows every region and its followers to practice their religion in  freedom and therefore Muslims and Sikhs are allowed and will always be allowed to wear their hijabs and turbans.