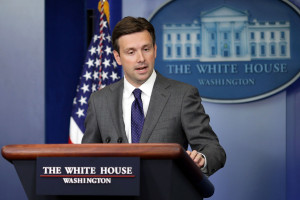 White House, Washington DC: President Barack Obama is under pressure to apologize for the Kunduz hospital bombing in Afghanistan, which killed twenty two people, out of of which twelve belonged to the Médecins Sans Frontières (MSF) also known as Doctors Without Borders. An American AC 130 gunship plane had bombed the hospital on October 3rd around 2:30 at mid night.
Christopher Stokes, general director of Médecins Sans Frontières, said in a statement late 4 October 2015: “MSF is disgusted by the recent statements coming from some Afghanistan government authorities justifying the attack on its hospital in Kunduz. These statements imply that Afghan and U.S. forces working together decided to raze to the ground a fully functioning hospital – with more than 180 staff and patients inside – because they claim that members of the Taliban were present. This amounts to an admission of a war crime.”
Both the United States and the NATO are investigating into what exactly had happened which prompted the US military to take such action. Regardless of what mistake may have been made, General Campbell told a Senate committee on Tuesday that the strike was ultimately the result of “a U.S. decision made within the U.S. chain of command.” He took responsibility for the sustained bombardment of the medical facility, which he said took place in response to an Afghan call for help. “Obviously, the investigation is still underway, but Campbell’s thinking now is that the Americans on the ground did not follow the rules of engagement fully,” said one of three American officials, all of whom emphasized that no final conclusions had been reached and that the inquiry could yield different reasons for what transpired.
At yesterdays press briefing at the White House, the Press Secretary of the White House, Josh Earnest was questioned more than twenty times by the media as to how such a blunder of bombing a hospital was made by the US military and that why isn’t the US President, Barack Obama apologizing for such a mistake instead of just condemning it.
Josh Earnest replied several times that the US administration especially the Department of Defense in conducting an inquiry into the Kunduz hospital bombing and that after the investigation is completed President Obama will then issue another statement. He further said that President Obama has already spoken to Afghan President Ashraf Ghani in this regard and shared his deep condolences with those who lost their dear ones.
Another question which was put to Josh Earnest by several journalists was whether the US government will increase its military presence in Afghanistan due to recently increased attacks by the Taliban in Afghanistan. Josh Earnest in his reply stated that at present there are only ten thousand American troops in Afghanistan and depending on the ground situation which is being minutely monitored the future line of action will be decided by the Obama administration.
« Three years imprisonment be mandatory on plea bargains with NAB
Obama calls MSF chief to apologize »