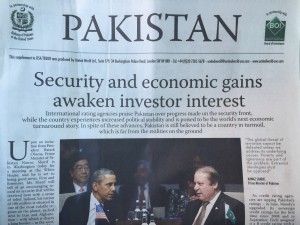 Jalil Afridi
Washington DC: On the arrival of the Prime Minister Nawaz Sharif in Washington DC, the Pakistani Embassy and the ministry of Board of Investment (BOI) has arranged a special supplement highlighting the security and economic issues of Pakistan. The twenty pages supplement has advertisements of different government and private sector and it was produced by United World Limited based in London. This supplement is suppose to be distributed in leading American daily newspaper USA TODAY  tomorrow.
A Mexican lady by the name of Paulina Gallardo was seen in the Williard Inter Continental Hotel showing the supplement to Press Attache of Pakistan in Washington DC. Interestingly when this The Frontier Post asked for the visiting card of Paulina, she had a Pakistani mobile number ( which was switched off) and had the logo of Embassy of Pakistan in United States on it.
Publishing such supplements is not the first time done by Pakistani officials but it certainly shows that instead of relying on local American companies which are operating in Pakistan, the Pakistani bureaucracy and politicians rely on government organizations and Pakistani companies to highlight their achiements and goals and to impress the Prime Minster of their own country.

Politicians and government officials of America are hardly impressed by such supplements as they would rather see American companies welcoming the prime minister and highlighting their issues or achievements in Pakistan through such supplements.

Pakistan Ambassador to United Nations Dr Maleeha Lodhi was also seen in the Williard Hotel waiting for the Prime Minister arrival, who is expected to reach his hotel around 2pm in the afternoon.
« No country can succeed without religious freedom: Kerry
US satisfied with Pakistan nuclear safety »