A question which needs answer

Comment by: Jalil Afridi
A couple of weeks ago when the U.S. Department of  Defence invited foreign journalists for press briefing at National Press Club Washington DC, the Spokes Person Captain Jeff Davis had stated that “Taliban in Afghanistan are now Reconciliation Partners” and that the U.S. is no more involved in combat operations in Afghanistan. The Frontier Post along with one other English daily flashed this news the very next day with regard to this comment of Captain Jeff Davis.
The next day something was bothering me and I wanted to make sure that the Captain really meant what he had said and I sent him an email to confirm his statement. In reply to my email Captain Jeff Davis wrote back that “”Please excuse me as I misspoke in referring to the Taliban as a partner. They certainly are not.”
He further said that ”What I meant to say was, the Taliban’s only path to political legitimacy is through an Afghan-led reconciliation process. The Taliban have a choice: they can join in a peace process or continue to kill Afghan civilians and destabilize the country. It remains our hope that they will choose peace.”
In reply to his email, I asked him what the policy of Pentagon was with regard to Tehrike Taliban Pakistan (TTP) and TTP being a wing and brain child of Taliban in Afghanistan. To my question he replied by saying that TTP is a terrorist group and that for any more questions I should approach the State Department.
I followed his instruction and the next day I went to the daily Press briefing at the US State Department, where John Kirby is the Spokes Person and hosts the national and international media on daily basis. Following is the content of the conversation I had with him during the press briefing.

“QUESTION: Last week the DOD held a talk with a foreign journalist and Captain Jeff Davis had stated that the Taliban in Afghanistan are now reconciliatory partners. And then the next day when I contacted him, he denied it. He said he misspoke about it. So my question is: What is the role of Taliban now in Afghanistan? And how do you view the TTP in Pakistan? Because the TTP in the State Department information, it’s a terrorist group. But the Taliban in Afghanistan are not and they are in dialogue. So can you explain us the difference between the two —

MR KIRBY: Our views of the TTP haven’t changed. And you’re asking me – so the Pentagon said something and then they said they misspoke and —

QUESTION: Yeah, they misspoke. They – when I asked —

MR KIRBY: — took it back, and now you want to know what I think of the mistake that they corrected?

QUESTION: No, they asked me to ask the State Department about the TTP that —

MR KIRBY: So you think if you ask me, maybe I’ll give you a different answer than the Pentagon?

QUESTION: No, my question is that if the TTP is a terrorist group, and Taliban in Afghanistan are in a dialogue process, aren’t TTP a part of the Taliban?

MR KIRBY: I think I’m – our position on the TTP hasn’t changed. We still believe they’re a terrorist group. And as for relations between the TTP and the Taliban, you should talk to them. What we have long said is that we support an Afghan-led, Afghan-owned reconciliation process. We’ve also said that we understand – and we’ve said this for years – that not every member of the Taliban is reconcilable, and that the Taliban isn’t necessarily a monolithic group that has ultimate control over every single member. We support an Afghan-led reconciliation process with those members of the Taliban that are willing and able to participate in that.

Despite having the above dialogue I am still not clear about how the Taliban in Afghanistan are being engaged in dialogue process whereas on the other hand Pakistan is conducting Operation Zarbe Azab against the TTP in different parts of Pakistan.

There are two logical aspects to this scenario. One, that the whole war on terrorism in Afghanistan has now shifted to Pakistan where the TTP is now the real “Taliban” and secondly that US has realized that Taliban in Afghanistan are in reality a political force of the country which will gradually be made part of Afghan government.

A lot of hype is also created to the visit of Army Chief, General Raheel Sharif to the United States where observers are saying that he enjoys the real power of foreign policy of Pakistan. US journalist are also saying that Pakistani Army Chief will be pressed during his visit to America to bring the Taliban in Afghanistan to negotiation table because Pakistan has enormous influence over them.  Then the question arises, how can Pakistan have enormous influence on Taliban in Afghanistan if Pakistan is facing juggernauts of problems with TTP in Pakistan?

Year 2016 seems to the decisive year for the future of both Taliban in Afghanistan and the TTP in Pakistan. A senior journalist in Pakistan says that if the Taliban come into power in Afghanistan again then no body can stop their strong entrance into the power corridors of Pakistan as well.

Others believe that both the Taliban in Afghanistan and TTP in Pakistan might become one group and merge into ISIS. It is all upto the times to come, but in either the cases the region seems to be entering into decisive state of either becoming a peaceful region or a ball of fire. The chances of later seems to be more stronger. 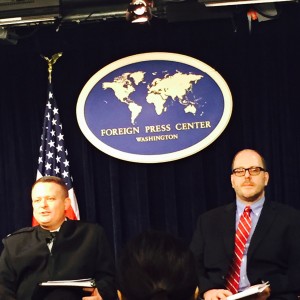 Posted on 6 hours ago

Jalil Afridi
Washington DC: When The Frontier Post contacted Captain Jeff Davis about his comment with regard to terming Taliban as \”Reconciliation Partners\” he stated that \”Please excuse me as I misspoke in referring to the Taliban as a \”partner\”. They certainly are not.\”
He further said that \”What I meant to say
was, the Taliban�s only path to political legitimacy is through an Afghan-led reconciliation process.
The Taliban have a choice: they can join in a peace process or continue to kill Afghan civilians and destabilize the country. It remains our hope that they will choose peace.\”

Earlier today In what can be termed as one of the biggest policy change by America, the Director of Press Operations, US Department of Defense, Captain Jeff A. Davis while addressing foreign media representatives at the National Press Club Washington DC stated that the US government no longer considers Taliban in Afghanistan as terrorists and that the Taliban are now \”Reconciliation Partners\” in Afghanistan to bring peace and stability in the country.

Captain Jeff A. Davis stated that the US military has now stopped conducting counter terrorism operations against the Taliban in Afghanistan and only targeted operations are done when deemed necessary. While responding to a question about expansion of ISIS in Pakistan and Afghanistan, Captain Jeff stated that there are reports of ISIS growing in that region but stated that \”ISIS does not have the command and control system in Pakistan and Afghanistan in compare to what they have in Iraq and Syria. He further said that a few terrorists groups just use the name of ISIS for the \”branding\” purpose.
Captain Davis extensively briefed the journalists about the US military activities in Syria and said that it is Syria President Bashar Ul Assad who is the major supporter of ISIS and until he is ruling Syria there can be no peace achieved in the country.
Captain Davis termed the Russian presence in Syria as \”wrong\” and said that the Russian government is not only using air force power in Syria but there are also Russian soldiers present on ground in Syria. He hoped that Russian will end its support to Bashar Ul Assad soon in order to bring peace and stability in the country.
He further said that there are no US troops on ground in Syria and that there is a Syrian Arab group which the US government is supporting in Syria and that the United States is providing them with supply of arms and ammunition to fight against the ISIS in the region.