Washington DC: Indian Prime Minister, Natenda Modi is expected to visit Pakistan next month. According to sources his date of arrival is not yet confirmed but it has been decided in principle that Modi will visi Pakistan soon to bring the ties of both countries to normalcy. In the mean time Nawaz Sharif has directed his cabinet members and party leaders not to issue any harsh remarks or statements against India in coming days. 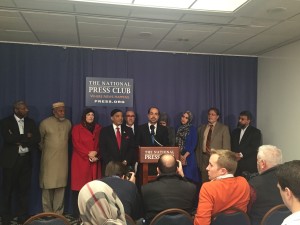 Washington, D.C.: A press conference was held at the National Press Club Washington, D.C. by the U.S. Council for Islamic Organization which comprises of many different Muslim organizations. Leaders of the council said that hate crimes are increasing in America whereas on the other hand it said that it is like organization like ISIS which has killed more Muslims than anyone else.

The council vowed that it will start initiatives to remove the misperceptions about Islam in America. Leaders of the council said that due to incidents like the San Bernadino in California, the religion of Islam should not be target.
The council said that in recent days incidents of hate crime have increased in America especially the targeting of mosques in different parts of America and therefore the concil has decided that mosques through out the country will be opened to followers of different religions to educate them about the true face of Islam.
Leaders of the council said that Muslims have always condemned terrorism in evey form but now it is time that American Muslims should even inform their neighbors about the non violence teachings of Islam. Leaders vowed that the perception of Islamphobia needs to be removed at the earliest otherwise youth in America will develop hate against each other.
Leaders vowed that Muslims have always played a positive role in development of America and they will continue to do so.
Leaders said that Muslim youth in America should not be treated as suspect but as the brightest prospect of the country. 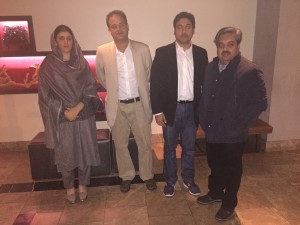 Dashington DC: Pakistani embassy in Washington DC completely ignores three FATA parliamentarians who are currently in Washington since last one week on the invitation of US State Department. Member National Assembly Qaisar Jamal Afridi from Darra Adam Khel (FR Kohat), Ayesha Gulalai from Waziristan Agency and Senator Hidayat Ullah from Bajaur Agency have meeting different senior American high officials including congressman and senators but the embassy of their own country did not even bother to call them or invite them for a cup of tea. At a time when FATA is probably the most important topic of discussion between US and Pakistani parliamentarians, the embassy of Pakistan could have briefed their own Parliamentarians with regard to different issues of FATA so that the U.S. Officials would have briefed in a more proper manner but instead the officials at the embassy refuse to wake up from their deep naps and usual entertainments. Such treatment is not only meted out to the FATA parliamentarians but also to this scribe who also belongs to FATA and is among the four working Pakistani journalists here in Washington DC whom despite several requests to Nadeem Hotiana, the press attache at Pakistan Embassy since last four months has been unable to get a few minutes from the Pakistani Ambassador in Washington DC for an interview.