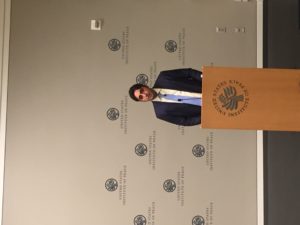 Washington, D.C.: Chairman Pakistan People Party (PPP) Bilawal Bhutto Zardari while replying to a question at the United States Institute (USIP) of Peace said that him and his father, former President Asif Ali Zardari have not yet met the new President of America, Donald Trump.
Bilawal Bhutto Zardari in his speech at USIP highlighted the atrocities committed by India in held Kashmir and also highlighted weak government and economy of Afghanistan.
It is pertinent to mention here that Bilawal Bhutto along with Asif Zardari, Bakhtawar Bhutto, Sherry Rehman and Jamil Soomro have been in Washington, D.C. since last few days in bid to meet Donald Trump.
Sherry Rehman, the former federal minister for information has been seen meeting low cadre party members of Donald Trump, including Sajid Tarar in order to find a way to get close to the White House but so far she has failed.
Former President Asif Ali Zardari is trying his Dubai contacts which are common friends of Donald Trump as well in order to arrange a meeting between the two. 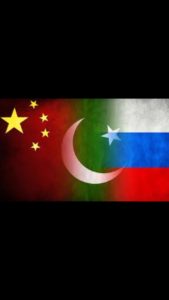 The recent moot in Moscow between Russia, China and Pakistan to discuss the future of Afghanistan can be termed as a failed moot because the very country, in this case Afghanistan was not present at the event. Not just that, it was the third moot of such kind between these countries and Afghanistan has so far been ignored in all the moots held. Ahmad Shekib Mostaghni, Afghanistan�s foreign affairs ministry spokesperson regretted the fact that his country was ignored in the moot. Russian foreign ministry spokeswoman, Maria Zakharova to pacify the critics said that in future moots, Afghanistan will be invited to participate.
Some analysts think that the moot was aimed to give America a message that they are no longer considered an important player in any consultation or discussion about Afghanistan. When I asked John Kirby, the Spokesperson of US State Department about the Moscow moot on Afghanistan, he did welcome it but the welcome was not his usual style of warm welcome. He did say that everything about Afghanistan should be Afghan led.
Whatever the aim of this moot was, there is no doubt that such meetings and moot can not produce the desired results unless Afghan government is taken on board. This Moscow moot did bring a bad taste to international norms of foreign policy as no country including Russia, Pakistan and China would like the same to be done to them; discussing them without their presence.
After the moot, �the three countries expressed particular concern about the rising activity in the country of extremist groups including the Afghan branch of IS,� said Maria Zakharova, the ministry spokesperson, said referring to ISIL, also known as ISIS. One wonders how much is the truth in the statement of Maria because both Pakistan, Afghanistan and America has continuously been saying that there is very little presence of ISIS in that region. Recently in reply to my question, Richard Olson, US permanent Representative to Pakistan and Afghanistan had acknowledged that very little presence of ISIS exists in Pakistan and Afghanistan. Same kind of answers have been given by government officials of Pakistan who claimed ISIS does not enjoy much support or ground presence in Pakistan. Why was ISIS given such important in Moscow moot is some thing yet to be figured out. International observers suggest that ISIS is just an excuse whereas the real fact is that Russia is using its influence over the Taliban to bring Ashraf Ghani led government in Afghanistan to negotiation table.
On the other hand, former Prime Minister of Afghanistan and leader of Hizbe Islami, Gulbadin Hikmatyar is close to making his final deal with Afghan government. This process has taken a long time and at present the government of Afghanistan has sent a formal request to the United Nations to remove his name from the terrorists list. When I asked State Department Spokesperson John Kirby, whether US government would object at UN to the removal of the name of Hikmatyar from terrorists list, he replied in excellent diplomatic style by neither saying yes or no. It is not yet clear that out of the three countries, Pakistan, China and Russia who is the real beneficiary of Hikmatyar returning to Afghanistan. It could be even Iran. Many believe that since last several years Hikmatyar has been living in Iran, under their umbrella. Iran does want to continue with their influenced portion of Afghanistan through their religious sector and businesses.
China on the other hand has a few big businesses in Afghanistan especially with regard to natural resources but China�s real interest is stopping the collaboration of militants from China, Afghanistan and Pakistan. Chinese weapons landing in Afghanistan and Afghanistan�s Heroin landing in the containers of China is a realty which China can not ignore.
Russia has similar kind of issues as China except that Russia has many old followers in Afghanistan. Pakistan on the other hand has much more role and interest because of being next door neighbor of Afghanistan. It will continue to play its role and use its influence in Afghanistan in years to come. The only thing which Pakistan needs is to be more careful is the fact that it must do everything with sincerity in Afghanistan. No country can gain or loose more than Pakistan in whatever happens Afghanistan.
Pakistan must have the best relations with Afghanistan, better than any other country. Lastly, America is not leaving Afghanistan. It has not spent so much time, energy and money into Afghanistan for no reason. Instead of using Afghanistan as a big football ground for other nations to use, Pakistan, China, Russia, India, Iran and the US should sit down with sincerity and help the country stand on its own feet with dignity and honor. If this can not be done, then at least Afghanistan should be on board whenever and wherever they are discussed at international forum.