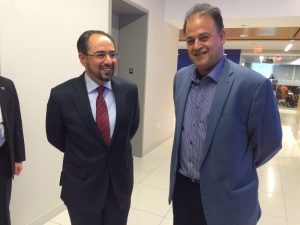 Jalil Afridi
Washington, D.C: The Foreign Minister of Afghanistan, Salahuddin Rabbani said that his country has stopped asking Pakistan for holding talks with Taliban whereas now they are asking Pakistan for taking action against certain terrorists groups which are operating from across the border.
Mr Rabbani while addressing at the Atlantic Council in Washington, D.C. said that just like Afghanistan has no objection to which country Pakistan has good relations with, Pakistan should also not have objection to Afghanistan having cordial relations with India. He said that “India is a strategic partner and is building schools and hospitals for the people of Afghanistan.” Mr Rabbani hoped that some day Pakistan and India could resolve their issues and become good neighbours.
Mr Rabbani welcomed the recent opening of Pakistani border
points with Afghanistan and said that the closure of border not only created problems for the people but also damaged Afghan economy tremendously.
With reference to the recent attack on a hospital in Kabul, Mr Rabbani said that the attack was carried out by ISIS. He advised the new US administration to increase the presence of US troops in Afghanistan in order to fight the twenty three different terrorists groups which are currently operating in Afghanistan.
With regard to China, Mr Rabbani said that the reports that Chinese troops are patrolling the Afghan side of border are not true. He said that “Chinese are patrolling their own border but we are in touch on regular basis because China has concerns about some terrorists groups entering their country through Afghanistan.”
When asked about the Russian and Iranian contacts with Taliban, Mr Rabbani said that both of these countries have assured that they are not providing any material support to Taliban but they are in touch with them because they want to bring them to negotiation table and bringing peace to Afghanistan. Mr Rabbani also said that next month Russia is holding conference on Afghanistan and they have invited the U.S. to participate in the said conference.
When The Frontier Post asked about the ban of Pakistan newspapers by Afghan government since last three years, Mr Rabbani said that he is not aware of such thing and assured that he will look into this issue.