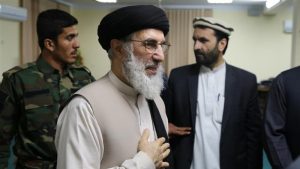 Will Hikmatyar bring Pakistan-Afghanistan closer?
Comment By: Jalil Afridi
Hizbe Islami Chief, Gulbadin Hikmatyar since his arrival in Afghanistan has brought a political stir in the country. Of course just like any other reknowned political figure, Hikmatyar also has those who welcomed him and those who are not happy with his arrival in the political area of Afghanistan. But one thing is for sure that Hikmatyar arrival in Afghanistan has been made possible after the approval by the US government, who still has thousand of troops placed in Afghanistan and is planning to increase it more in days to come.
It is not clear how and where Hikmatyar entered Afghanistan but his entry into Kabul and his picture taking guard of honor walk along with Afghanistan President, Ashraf Ghani smiling together made it on the pages of many international media around the world. Hikmatyar is no ordinary man to international media. He was the front runner against the soviet invasion of Afghanistan, former Prime Minister of Afghanistan and leader of one of the largest political party who was actively involved in the civil war in Afghanistan in the mid 90’s.
Gulbadin Hikmatyar along with Afghan President while addressing a gathering in Kabul yesterday said that Taliban are his brothers and that he is ready to play role of a mediator to bring them to peace. He urged the Taliban to lay arms and bring peace to the country which has been suffering for almost four decades.
President Ghani also urged the Taliban to come to the negotiation table and solve all pending issues through dialogue. Chief Executive, Abdullah Abdullah in his adress called the Taliban “brothers of Hikmatyar” which certainly showed that he is not too upbeat about the dialogue process with Taliban.
Pakhtun population of Afghanistan is certainly very happy with the arrival of Hikmatyar and they have a reason to be happy as well. Since last sixteen years Pakhtuns have been ignored in the decisions making of Afghanistan, although they are more than sixty percent of the population of the country.
Hikmatyar since his arrival has criticized some media outlets of Afghanistan and that has gotten eye brows raised both in Afghanistan andin the western world. Media outlets in Afghanistan are mostly funded by the US government through its different projects and they certainly have been biased on many issues. Media in Afghanistan has a very important role to play in the current political scenario of the country. In his recent interview to Ashna Tv of Voice of America, the Afghan Ambassador to the United States said that there is no existence of Daish or ISIS in Afghanistan, whereas the US recently dropped the biggest bomb on the hideouts tunnels of ISIS in Afghanistan. Hikmatyar on the other hand has also mentioned the existence of Daish in Afghanistan. In such scenarios the local media of Afghanistan needs to inform the public and the international community about the real and true facts on the ground in Afghanistan.
Taliban on othe other hand have not made any comments with regard to Hikmatyar. It is also not clear how much influence Hikmatyar has over the Taliban and especially with regard to their demand that they want foreign forces to end the occupation of their country.
Hikmatyar has now reached the decisive moment of his political career. His relations with regard to America, Pakistan and Iran are yet to be seen. He has not made any important comments in this regard yet. Though Hikmatyar is still being accused of allying with Pakistan but those aware of Afghanistan history know that during his last days in Afghanistan, he did not have cordial relations with Pakistan and therefore he had decided to take refuge in Iran instead of Pakistan while he was being hunted.
There is no other option for both Pakistan and Afghanistan but to have cordial relations with each other. Pakistan is pinning its hopes that Hikmatyar will be able to remove the distrust between the two countries and will work toward avoiding incidents of the kind which took place yesterday where cross firing from Afghanistan side killed seven innocent civilians of Pakistan. Afghanistan has all the right to have relations with India but these relations should not be built at cost of waging war with Pakistan. There is no doubt that India is using Afghan soil to carry out terorists activities in Pakistan and one recent proof of such kind was that last month when the US dropped the biggest bomb in Afghanistan targeting ISIS hideouts, there were seven Indians who were also killed. What were those Indians doing with ISIS fighters is not hard difficult to figure out.
Beside Gulbadin Hikmatyar the new US administration under Donald Trump also has a difficult task ahead in Afghanistan because beside Pakistan, Iran and India new powers such has China and Russia have also entered the political arena of Afghanistan. Let us pray and hope that both Pakistan and Afghanistan are not collided with each other. This is will not only bring destruction in both the countries but the entire region. Gulbadin Hikmatyar political vision and influence can certainly play a pivotal role in this scenario. True Afghan leadership has been ignored in Afghanistan political process since last sixteen years and foreign brands such as Hamid Karzai and Ashraf Ghani have been leading the country. Let us hope that the political stir brought by Hikmatyar yields better results for Afghanistan and bring it closer to Pakistan.

« We have stopped asking Pakistan for talks with Taliban: Rabbani
Durand Line is an International Border »