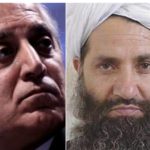 Jalil Afridi
Washington DC: As the discussion of the postponement of upcoming Afghan presidential elections continue, rumors are ripe that the US government is also considering giving Taliban some sort of power sharing deal in the next government in Afghanistan.

In reply to a question, US department of state spokesperson Heather Nauert said that Washington was hoping to “facilitate the Afghans and the Taliban coming to some sort of lasting peace agreement. Our officials have long said, including the DOD, that we don’t see a military solution to this outcome – to this in Afghanistan.”
It was very interesting to note the other day when Afghanistan President Ashraf Ghani while speaking at the John Hopkins University in Washington DC did not mention a single word about the recent peace summit held in Moscow between representatives of Taliban along with officials from Russia, Pakistan, India, US and several other countries.
US Special Envoy, Zalmay Khalilzad is the main diplomatic driving force in the region right now, who is on his second visit to Pakistan and Afghanistan in less than a month. At the same time Zalmay is meeting the Taliban officials in Qatar to discuss the future of Afghanistan.
It is also pertinent to mention here that while all that is happening on diplomatic level the Afghan Defense Minister Tariq Shah Bahrami said that battles are ongoing in at least ten provinces in the country and that the level of threats are beyond the capabilities of government.