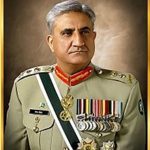 Jalil Afridi
Washington DC: Pakistan’s Army Chief, General Qamar Bajwa is expected to be in Washington DC during the visit of Pakistan’s Prime Minister Imran Khan where he ( the prime minister) is meeting US President Donald Trump on the 22nd of July. The military leadership will be holding parallel meetings with the concerned US officials with regard to matters related to security, support and Afghanistan. Both the elected government and the army wants to convey to the US administration that they are on same page when it comes to the foreign policy of Pakistan.

Certain quarters in Pakistan and America are intentionally not giving much importance to the meeting between Prime Minister Imran Khan and President Donald Trump. But facts remains that these meetings are expected to be held in very cordial atmosphere and produce some very good results for both the countries.

To a query by The Frontier Post whether both the leaders, Imran Khan and Donald Trump will hold a press talk after their meeting, White House replied by saying that it is not yet confirmed.

The first visit of Prime Minister Imran Khan to America is taking place at a time when US and Taliban dialogue is not yielding very positive results and when Pakistani opposition parties especially the Pakistan Peoples Party and Pakistan Muslim League (Nawaz) are raising hue and cry about the accountability process in Pakistan.

Prime Minister Imran Khan two special assistants for overseas Pakistanis, Zulfi Bukhari and Ali Jehangir Siddiqui are already in Washington DC finalizing activities of Prime Minister Imran Khan. To put a dent at Imran Khan’s visit, Pakistan Peoples Party Chairman, Bilawal Bhutto Zardari is expected to arrive in Washington DC by July 15 and he is expected to stay here for almost ten days. During his visit Bilawal Bhutto Zardari is aiming to raise issues of human rights violations, curbs on press freedom and inhumane treatment of under trial prisoners in Pakistan. Bilawal through coordinated efforts and lobbying is targeting Imran Khan’s government by seeking US support to pressurize Imran Khan and make his visit to America as non achiever.

On the other hand Pakhtoon Tahafuz Movement ( PTM) is also planning to embarrass the Pakistani Prime Minister during his visit to America but are keeping their strategy secret.

To counter all the negative things, Pakistan Tehreeke Insaf (PTI) through its different local chapters in America, especially New York, New Jersey and Washington DC are planning to hold unique activities for its leader and Chairman Imran Khan. The most important highlight of of such event is the speech of Prime Minister Imran Khan at the heart of Washington DC, a few blocks away from the White House in Capital One Arena. The said arena has capacity of more than twenty thousand people with state of the art lighting and music systems. All major music concerts, basketball and ice hockey games take place at the said Capital One Arena. Thousands of flags of Pakistan and America are already in printing process, many Halal food trucks and other arrangements are already finalized.