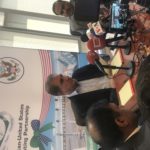 Imran not coming to US with begging bowl: Qureshi

Washington DC: Foreign Minister of Pakistan, Shah Mahmood Qureshi while inviting the US administration to invest in China Pakistan Economic Corridor said that it is a wrong impression that the said project is only about Pakistan and China.
Pakistani foreign minister also said that the Prime Minister of Pakistan is not coming to the US with begging bowl but instead will be talking to American administration with integrity and keeping Pakistan’s interests first.
With regard to peace process in Afghanistan, Qureshi said that Pakistan wants to be recognized as partner in peace and not a hurdle. Qureshi said that Pakistan will be the biggest beneficiary of peace in Afghanistan.
Referring to India Qureshi said that Pakistan has no problem if both India and Afghanistan has cordial relationship with each other but these relations can never be as strong as relations between Afghanistan and Pakistan due to both the countries being neighbors to each other.
When The Frontier Post asked whether Prime Minister Imran Khan will raise the issue of Kashmir with US administration, Qureshi said that Pakistan has given all sorts of positive gestures to India including opening of the Kartarpur Corridor, now it is India’s turn to realize that solving the issue of Kashmir is in their best interest.
With regard to raising tensions between US and Iran the Pakistani foreign minister said that tensions with Iran could harm the dialogue process in Afghanistan which the US administration is perusing actively. He advised both the countries to show restraint and resolve the issues through diplomatic channels. In reply to a question about Pakistan Army Chief and Director General ISI accompany Imran Khan on his visit to America, Qureshi said that it is done to convey to the US government that in Pakistan both the elected government and the army is on same page.
With regard to Prime Minister Imran Khan’s engagements in Washington DC, Qureshi said that beside meeting US president Donald Trump, Imran Khan will also be meeting Secretary Mike Pampeo, House Speaker Nancy Palosi, Senate Committee on Foreign Relations, US Pakistani coccus of Congress, heads of the IMF and World Bank, leading CEO’s of America, Pakistan American Business Council and will be giving interviews to American television channels. Prime Minister Imran Khan is coming to America in commercial flight tomorrow and staying at the residence of Pakistani ambassador to the America. The foreign minister is also staying at the ambassadors’ residence. President Trump is expected to give tour of the White House to Prime Minister Imran Khan.