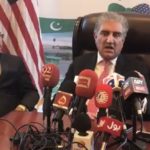 Jalil Afridi
Washington DC: Foreign Minister of Pakistan, Shah Mahmood Qureshi said that Pakistan wants to be a partner in peace in Middle East and will not become a party to any escalation in the region.
Qureshi is visiting Washington DC after his recent visits to Iran and Saudi Arabia where he held meetings with his counterparts and discussed ways to open diplomatic channels between the three countries.
In Washington DC, Qureshi has met Secretary of State, Mike Pampeo, Senator Lindsay Graham, National Security Advisor, several congressmen and briefed them about his meetings in Iran.
During his press briefing at Pakistan embassy in Washington DC, Pakistani Foreign Minister said that he sees flexibility from Iran in holding negotiations and was hopefully that all disputes can discussed in diplomatic manner. Qureshi shared the same kind of feelings about his meetings with Saudi officials as well.
With regard to Afghanistan, Qureshi said that the US government had demanded of Pakistan to bring Taliban to the negations table and “ thanks to Allah we did bring the Taliban to hold negotiations with the US.”
Shah Mahmood said that after bringing the Taliban to negotiations the US government demanded that Pakistan play its role in release of the two hostages held by the Taliban. “ Thanks to Allah after holding at least 72 meetings, we were successful in convincing the Taliban to release the two hostages” Qureshi further added.
Shah Mahmood Qureshi said that again the US demanded that Taliban must agree to ceasefire and “thankfully yesterday when I arrived in Washington DC I was informed that Taliban have agreed to ceasefire.”
All the expectations made from Pakistan have been accomplished by Pakistan, Qureshi said and added that now is a good time for US to sign a formal agreement with Taliban and move towards holding intra Afghan negations.
Qureshi regretted that the expectations which Pakistan had from the US were not fulfilled and that these expectations were related to trade, economy and upgrading travel advisory.
“ US Secretary of Commerce was suppose to visit Pakistan last year but he didn’t come” Qureshi said with sadness. He hoped that if US upgrades the travel advisory, tourism in Pakistan will really flourish.
At the end of his press conference, Shah Mahmood Qureshi started counting the subjects which he had covered to make sure nothing important was forgotten and he was reminded by his assistant regarding Kashmir. Shah Mahmood Qureshi said that during his meeting with Secretary Pampeo he had informed the secretary about Indian brutalities in Kashmir and about reservation of Pakistan regarding upcoming visit of President Trump to India in February.

« US Congress echoes with human rights abuses in Kashmir