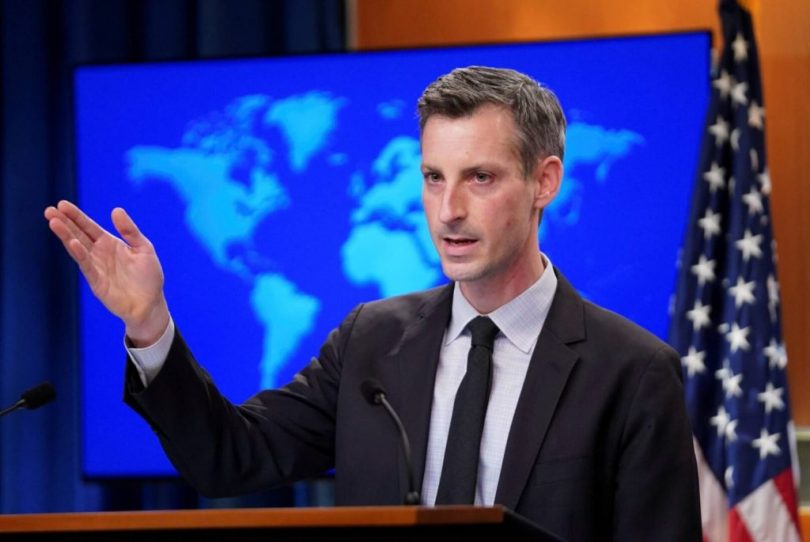 Washington DC: The US State Department Spokesperson Ned Price while replying to iconic reporter of AP Matt Lee at the department’s briefing room said that “we had called on the parties (India & Pakistan) to reduce tensions along the Line of Control by returning to the 2003 ceasefire agreement.”

Net Price also welcomed the ceasefire agreement between Pakistan and India and said that this agreement will be starting today, February 25, 2021 and hoped that both the countries will strictly adhere to the original peace agreement of 2003.

It is very rare that Pakistan or India is discussed in the beginning of the press briefing and it was equally interesting to hear Matt Lee of Associated Press who in most of the cases is the first who is given the opportunity to ask question and so Matt questioned about India and Pakistan. And maybe that is reason why Matt said that “It’s very weird right?” and Ned Price replied by saying “it is very weird.”

With regard to Pakistan, Ned Price stated that “Pakistan is an important partner with whom wen share many interests…..Obviously Pakistan has an important role to play when it comes to Afghanistan.” An observer in Washington DC while talking to The Frontier Post said that things are not looking good  Afghanistan as thousands of Afghans in Kabul have started moving outside Afghanistan seeking asylum in other countries because these people are very concerned about the future of their country and especially the Pakhtoon population of Afghanistan who have seen the worst kind of brutalities in Afghanistan since last twenty years.