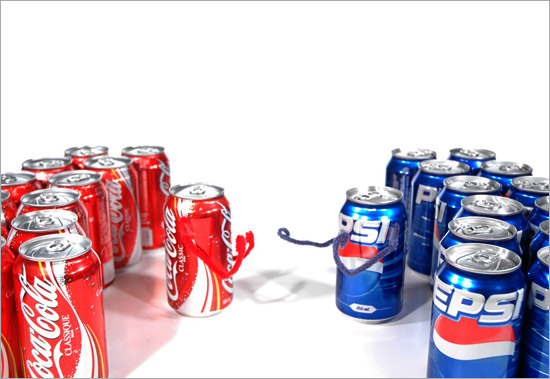 Jalil Afridi
LAHORE: World\’s leading American Soft drink manufacturer company Coca Cola has beat the sales of rival another American company Pepsi for the first time in Pakistan. From March 2013 till March 2014 this year Coca Cola drinks are sold in more numbers than Pepsi in Pakistan which is something that has never happened before.
Coca Cola took over their manufacturing of drinks from their franchise bottlers almost seven years ago and in span of only seven years they have left behind their major competitor Pepsi. On the other hand Pepsi soft drinks manufacturing still lies with their franchisees bottlers.
Some marketeers believe that it is due to poor marketing policies of Pepsi which has let them down, whereas Coca Cola in last few years through their marketing strategy have been amazingly close to the pulse and hearts of their consumers.
An advertisers when asked for his comments said that   all that Pepsi does is sponsors cricket and that\’s it, whereas Coca Cola has touched almost every market.
Another advertiser said that \”if it was not up to Mountain Dew and some chips products such as Kurkurai and Lay\’s, the Pepsi plants/bottlers would probably have closed down.
Pepsi and Coca Cola are world leading soft drinks manufacturers who have the world class competition with each other. Both these companies adopt the best marketing strategies in the world whereas they also have the biggest spending on marketing of their products.
A source of condition on anonymity also confirmed to The Frontier Post that for Pepsi, Pakistan is one of the most important country and the reason for that is because Pepsi makes its Syrup (out of which the drink Pepi is made) only in three countries in the world and one of these three countries is Pakistan.
A senior tax officer when approached, told The Frontier Post that \”we are very thankful to Pepsi and Coca Cola for the huge amount of tax they pay to the government of Pakistan. But these companies are also making billions from Pakistan.\”
It is also pertinent to mention here that bottlers franchisees of Pepsi in Pakistan are all big businessmen with strong political affiliations.