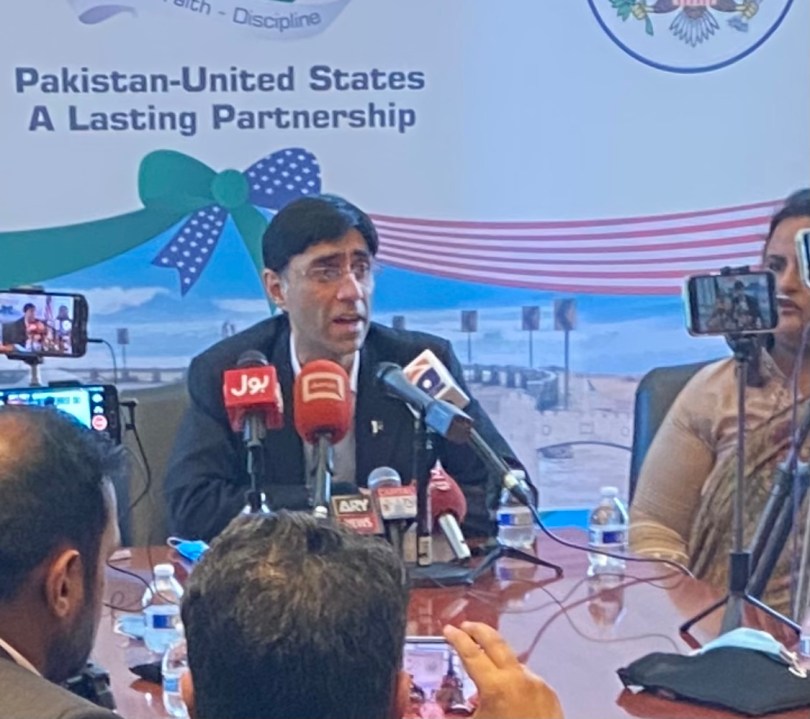 Washington DC: National Security Advisor of Pakistan, Moeed Yousaf stated that his visit to Washington is based more about substance and technical and not just optics. He was speaking to Pakistani journalists in Washington DC.
Moeed Yousaf further said that there is
expectation and reality disconnection between Pakistan and the United States.
“Pakistan has leverage over the Taliban but not influence, if Pakistan had influence over Taliban it would have stopped TTP from operating in Pakistan” Moeed added.

Regarding Afghanistan, Moeed Yousaf said that the one country which wants to see peace the most in Afghanistan is Pakistan. “Afghanistan is like life and death for Pakistan” Moeed added.

Pakistani National Security Advisor urged the United States to use its influence in Afghanistan to bring peace and have all the concerned parties sit together and come up with the solution for the future of their country.

Moeed Yousaf showed concerns about the  humanitarian crisis in Afghanistan in case civil war breaks out in the country and it’s effects on Pakistan.

Moeed Yousaf regretted the fact that Afghan soil has been used by India against Pakistan in the past and hoped that India will refrain from such activities in future.

“Pakistan wants connectivity to Central Asia because all those nations want access to our ports but to do all this peace in Afghanistan is imperative” Moeed Yousaf said.

In reply to a question by The Frontier Post, Moeed agreed that Pakistan needs to highlight its narrative and position on certain matters and to do that more work needs to be done by the government of Pakistan.

In reply to another question by The Frontier Post whether since taking charge as National Security Advisor has the later visited any bordering areas of Pakistan with Afghanistan, Moeed said that he has visited many areas but did not mention any names.