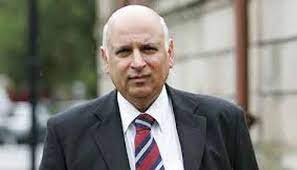 WASHINGTON DC: Governor Punjab Chaudry Muhammad Sarwar recently visited the United States where did an excellent job in humiliating Pakistan but he made excellent money to the tune of 40 thousand dollars for his NGO, Sarwar Foundation. And this amount was made only in Washington DC through his blue eyed boys.

Besides attending his niece wedding in Texas the governor also visited Pakistani embassy in Washington DC to make his visit official.

Chaudry Sahib pimps around the country in America asked Pakistani American businessmen to write Bank Cheques on the name of the governor’s wife. Ten thousand dollars were presented by PTI President in USA, Johnny Bashir to the governor. In exchange Johnny Bashir has asked the governor to help him with the e-payment platform which he is expecting to launch soon in Pakistan.

Those who gave the payments were given the opportunity and honor to meet the honorable Governor and were told that they will be taken care of when they come to Pakistan. One such gentleman was Mr Tahir from Texas, who had presented ten thousand dollars cash.

It is pertinent to mention here that Governor Punjab, Chaudry Sarwar stayed at Willard Intercontinental Hotel in Washington DC. Four to five rooms were booked for the governor and his buddies. The hotel bill which was approximately ten thousand dollars was paid by a Republican political figure who is of Pakistani origin.

A Pakistani diplomat in Washington DC while talking to The Frontier Post stated that he was so embarrassed by the speeches of the governor which he gave at events organized by Pakistan American politician Sajid Tarar and the Pakistani embassy in Washington DC.

A Pakistani American businessman while speaking to this correspondent said that “this is how you shoot two or three birds with one arrow.”

Another businessman said that “taking American businessmen to invest in Pakistan should have been the real goal of the governor but instead he was on another mission.”

it is also important to mention here that the honorable governor took fourty thousand dollars just from Washington DC and this does not include the amounts he received during his visit to Texas, Kansas, Chicago, Los Angeles, San Francisco, and Sacramento.

A member of the Sikh community gave a file to the governor which contained a request that Punjab government allocate a property next to Kartarpur Corridor for construction of school. Governor Punjab bragged all over the United States about his cordial relations with the Sikh Committee. But those at the helm of affairs know very well who constructed the Kartarpur Corridor.