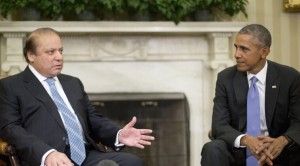 Jalil Afridi
WASHINGTON: Prime Minister Nawaz Sharif Thursday said that his meeting with US President Barack Obama was very positive and constructive�. Talking to media after his meeting with the US President at the White House, the Prime Minister said Stability in Afghanistan and Pakistan\’s relations with India were the areas where the two sides focused. He said Pakistan and the United States also agreed to continue to make joint efforts for the reconciliation and peace process in Afghanistan, which he added, would bring peace and stability to the region. Sharif who is here on a four-day official visit at President Obama\’s invitation said he shared with the US president Pakistan\’s desire to have peaceful relations with India. He said it was with this intention that he met his Indian counterpart, however regretted that there was no positive response from India. Prime Minister Sharif said he informed the US President the centrality of the Kashmir dispute in reducing tension between the two countries and for lasting peace. He said President Obama agreed that the Kashmir issue needs to be resolved and tensions along the Line of Control be addressed through pursuing an effective mechanism that stops the heavy loss of lives of Pakistani nationals. Earlier, Prime Minister Muhammad Nawaz Sharif and US President Barrack Obama met for almost two hours and both the leaders expressed their vows to work for the elimination of terrorism. Both the leaders expressed their determination to further strengthen and solidify the multi-faceted bilateral ties. In his initial remarks before media prior to their meeting, President Obama welcomed Prime Minister Nawaz Sharif for a bilateral meeting at the White House and said the United States and Pakistan have strong and longstanding ties and cooperation in a host of areas and \”not just on security\”. He said the meeting with Prime Minister will prove an opportunity to further deepen and solidify these relations. President Obama also mentioned the presence of a strong Pakistani Americans community in the US as source of strength for furthering the relations between the two countries. The Pakistani community was also contributing a lot to the development of the United States, he said. Prime Minister Sharif during his press conference also said his visit to the United States has achieved its desired objectives and presented a detailed overview of his meetings with Vice President Joe Biden and others. He said the two countries were focussing on six Working Groups under the Strategic Dialogue Process and expressed the hope that it would further bolster their ties. Prime Minister Sharif said he also briefed the US president about the progress Pakistan has made on the economic front, with positive indicators, duly acknowledged by international rating agencies. He said the US President appreciated the success Pakistan has achieved in this regard. He said he also shared with the US President the successes against extremism and terrorism through the ongoing operation Zarb-e-Azb.

« US satisfied with Pakistan nuclear safety
I Misspoke, says Jeff »