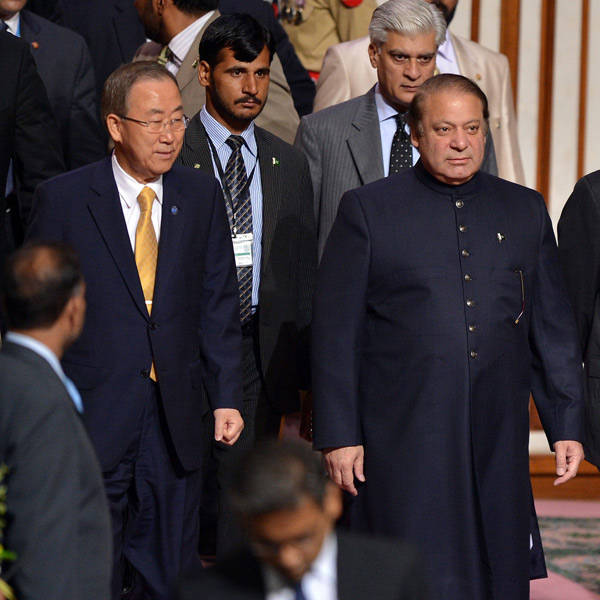 WASHINGTON: Prime Minister Nawaz Sharif, Tuesday, briefed Managing Director International Monetary Fund (IMF) Ms. Lagarde about his government s commitment to implementing the structural reforms.
MD IMF noted with appreciation the steps initiated by the Government of Pakistan with regard to introducing the tough but essential actions to stabilize the economy.
She added that the Extended Fund Facility of $ 6.64 billion approved by the IMF Board should help the Government of Pakistan to improve the medium term growth outlook and help move towards sustainable fiscal and macro-economic stability. On the sidelines of the 68th Session of the United Nations  General Assembly (UNGA) the MD IMF Christine Lagarde Turesday,y called on the Prime Minister Nawaz Sharif here.
The Prime Minister briefed the IMF head about his government s commitment to implementing the structural reforms and meeting the growth and inflation targets in line with his overall vision of reforming the economy.
In this context, the Prime Minister underlined the priority areas of his economic policy including broadening the tax system, privatization reforms in the public sector entities and managing the fiscal deficit.
Prime Minister Nawaz Sharif arrived in New York to lead the Pakistan delegation to the 68th session of the United Nations General Assembly. The 193-member Assembly is set to begin its high-level debate on Tuesday.
The prime minister is scheduled to address the General Assembly
on September 27.
The prime minister will attend the opening session of the General Assembly today (Tuesda) where US President Obama will deliver speech. Sources said that a meeting between US Secretary of State John Kerry and Nawaz Sharif will take place on September 6. His much-awaited maiden meeting with his Indian counterpart Manmohan Singh is expected on September 29 at the breakfast. The premier arrives in the New York when over 80 Christians were killed in suicide bombing at a Peshawar Church. Sartaj Aziz, Prime Minister’s Advisor on Foreign Affairs told private TV that Pakistan was committed to protect minorities and will assure the international community at the United Nations in this regard.