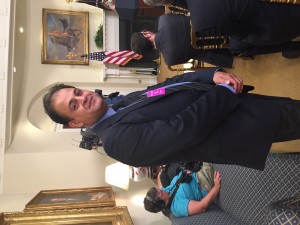 The U.S. government will stick to its “no concessions” policy — often incorrectly interpreted as “no negotiations” — while also allowing government officials to talk with terrorist groups like ISIS that have kidnapped Americans, according to a presidential policy directive Obama outlined on Wednesday.

The changes, which also include the creation of an interagency “fusion cell” to streamline efforts to free American hostages and improve communication between the government and families, follow a months-long review of U.S. policy.

Obama also made it clear that the U.S. government will not prosecute families looking to pay ransoms to terrorist groups holding their loved ones hostage — a threat some families faced during their ordeals.

“No family of an American hostage has ever been prosecuted for paying ransom for their loved one. The last thing we should ever do is to add to a family’s pain with threats like that,” Obama said at the White House.

“I’m making it clear that our top priority is the safe and rapid recovery of American hostages,” he added.

The U.S. president further said that he will be appointing a special envoy who will be specifically dealing with the American hostages in any part of the world. He emphasized the need for better organization of all government departments with regard to the new hostage policy.