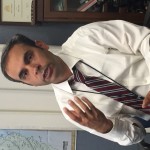 US draw down has left Afghans in uncertainty: Nafees

Jalil Afridi
Washington DC: Service Chief of Deewa Radio, Nafees Takar in an exclusive interview with The Frontier Post said that most of the Afghans are worried about their future after the draw down of US troops from Afghanistan. He further said that it is through education that Pakhtoons on both side of the Durand Line can improve and enlighten their future.
Deewa radio operates under the Voice of America and is a US government sponsored radio with no aim to earn revenues despite being the largest heard radio channel by the Pakhtoon population. Having its transmitters installed in Dubai, Tajikistan and Afghanistan, Deewa radio has the best sound quality and it aims to highlight the American point of views to listeners of both sides of Afghanistan and Pakistan.
Nafees Takar, who belongs to Takar village near Takhtbai in Khyber Pakhtoonkhw is the founding member and Service Chief of Deewa Radio. He has assembled some the best Pakhtoon journalists from Pakistan in the head quarters of Voice of America on Independence Avenue in Washington DC. The number of Pakhtoon journalists who are working in Deewa radio are twenty nine in Washington DC, twenty seven in different parts of Pakistan, seven journalists in the FATA region of Pakistan and one in Afghanistan. The US based Deewa staffers are given respectable salaries, latest equipment and are green card holders as well.
Regarding Policy matters, Nafees made it very clear that despite being a mouth piece of US government, Deewa Radio operates in a very balanced manner and no unnecessary pressures are exerted . He said \”we have callers who criticize the American drone attacks in the tribal areas of Pakistan.\” When asked about the challenges that he faces in Deewa, Nafees said every morning the first thing he does is to check his email to make sure that all his staff members back home in Pakistan are safe and sound. Another challenge for Nafees and his team is the access to different parts of tribal area and Baluchistan, which are known as the conflict zones in international media.
Regarding Deewa Television, which is another project of the same group, Nafees said that at present they only have two shows and these shows can only be viewed through dish. He did say that with passage of time if the US government allocates more fund, Deewa television will be turned into a full fledged satellite tv channel but at present there are no such plans.
Nafees Takar highlighted the role of social media and said that him and his team are giving special emphasis to tools such as Facebook and Twitter to promote Deewa radio.
Having a degree in literature, Nafees seemed very inclined towards promoting Pakhtoon literature and said that for three years there was a show at Deewa radio on the topic of Islamic mysticism through which all the literary works of the ancient Pakhtoon authors were highlighted and the public at large had really appreciated this initiative of Deewa radio. Regarding a similar such initiative, Nafees Takar informed that Deewa radio will soon be launching a book along with a cd which will have the old famous Pashto poems and pictures for the Pakhtoon children. He hoped that the Pakhtoons in Pakistan and Afghanistan will enjoy this product of Deewa radio and will serve as a marketing tool as well.
Nafees Takar also showed extreme sadness over the recent demise of great Pashto poet Raj Wali Shah Khattak and said that Deewa radio had allocated two full hours to his life and works.
Regarding Pakhtoon women , Nafees Takar said that Deewa radio and tv gives a lot of emphasis to women issues and there are many shows which are specially meant to promote women empowerment, their education and the role they are playing at present times in Pakhtoon society and the much stronger role which could play after getting proper education and equal opportunities.
When asked what makes him the most happy being Service Chief of Deewa radio, Nafees Takar said that \” I am really happy when a caller calls and says that I use to not send my daughter or son to school but now I do. I am really happy when a caller calls and says I use to not vote but now I do.\”