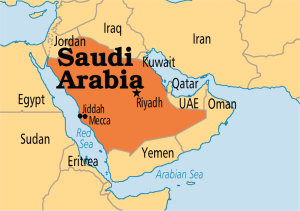 Comment by: Jalil Afridi
Though Pakistani leadership is trying its best to bring normalcy in relations between Saudi Arabia and Iran, the world powers have already begun lobbying against Saudi Arabia on many fronts. These lobbyists will be holding gatherings in different parts of world to discuss the negative sides of Saudi Arabia whether related to Saudi style of governing, human rights or the social and judicial injustices happening in the country.
Since the U.S.-Iran nuclear deal there has been a perception that the U.S. government will now be tilting its support towards Iran. This perception has now begun turning into a realty and lobbyists around the world will be forcing their respective countries to minimize their ties with Saudi Arabia.
Though it is not clear where these lobbyists and respective countries want to see Saudi Arabia in coming years but one thing is certain that destabilization of Saudi Arabia could prolong the Middle East and Arab Spring crisis for many years to come.
In this whole scenario the Bank of Harmooz plays a very critical role, as this is the route which carries the biggest flow of oil from the whole of the middle east to the rest of the world and it is Iran and Oman which has the most influence on this ocean belt. US government has already started its influence in Oman and is building all the strategic military related things in the country. This could be the reason why recently three US officials were killed in Oman who were there to train the Omanese police officials.
It is the Bank of Harmooz which will be playing a critical role in the coming days with regard to the Gawadar Port of Pakistan as well. Many countries around the world, including Iran, UAE, Oman and even the US are  not too happy with the operation of Gawadar Port and all efforts will be made by these countries not to let the Gawadar project be a success story and a game changer for Pakistan. The only country beside Pakistan which will benefit from Gawadar port is China and many international countries do want to see China become any more powerful than what it is at the moment. This is the reason why Chinese President Xi Jinping did not waste anytime and is already in Saudi Arabia to play its role in the making of the future of the region.
It is also very important to keep in mind that despite the fact that there are still sanctions on Iran, but the under world, which is sometimes supported officially but not declared officially, continues to supply oil to Afghanistan and even some European countries including France. And this is the reason why oil prices are dropping around the world, including in America, thus making the Americans very happy about their governments move to bring cordial ties with Iran.
Some of the lobbies which have started campaigning against Saudi Arabia are, Campaign for Peace and Democracy, Center for Inquiry, Coalition to End the U.S.-Saudi Alliance, Fellowship of Reconciliation, Food Not Bombs, Friends Committee on National Legislation, Historians Against the War, Institute for Policy Studies, Just Foreign Policy, KnowDrones.com, Middle East Crisis Committee, Peace Action, People Demanding Action, Popular Resistance, Roots Action, The Gulf Institute, The Markaz, The Nation Magazine, U.S. Labor Against the War, United For Peace and Justice, United Methodist General Board of Church and Society, United National Anti-War Coalition, Upstate Coalition to Ground the Drones and End the Wars, Veterns For Peace, Voices for Creative Nonviolence, WNY Peace Center and World Beyond War.
Pakistan is facing a very critical situation at the moment deciding who to keep as better friend and therefore it was good time for Prime Minister Nawaz Sharif and Army Chief Raheel Sharif to visit both Saudi Arabia and Iran. Pakistan has many fanancial interests from Saudi Arabia but it can also not ignore countries like Iran, UAE or the West in general.
There is no doubt the lobbying against Saudi Arabia has already begun and coming days are critical decision making days for Pakistan in general and Saudi Arabia in particular.Though Pakistan has been supporting Saudi Arabia unofficially in many ways since last year but now it is the time for Pakistan to decide which friend out of the friends it prefers the most.