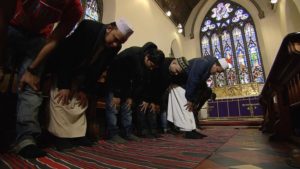 Children of Adam under one roof

By Jalil Afridi and Salman Yousafzai

I had never thought that one day as a Muslim I would be saying my Juma (Friday) prayers at a Jewish synagogue. I didn’t even know until I reached there that it was actually a synagogue where I have come to say my prayers. This can only happen in America.
Almost three hundred Muslims had gathered at Northern Virginia Hebrew Congregation Synagogue located in Reston Virginia last Friday to say the Friday prayers, which is the largest prayers gathering for Muslims every week. Pictures inside the main hall were covered and Imam (prayer leader) was standing in the front of the carpeted rows with his prayers carpet giving Khutba (sermon). Interestingly the prayer leader was talking about how Muslims in America no need to worry about Donald Trump becoming the US President.
This whole scenario was very interesting and unique for me.
On one hand I was trying to focus on Allah, by saying my prayers accurately. On the other hand, I was thinking where exactly have I come to say my prayers. And lastly, I was thinking why president elect Donald Trump was discussed at Friday
prayers. At the end of the prayers while talking to Muhammad, who was member of
the organizing committee which is responsible for arranging everything for
Friday prayers told me that since many years he has been organizing Friday
prayers at the said Synagogue and that there was a certain fee which they were
paying to the management of the Synagogue for allowing them to use their hall
and other facilities. He further said that it does not matter where you pray because Allah is everywhere and that
there is no harm or anything against the Islamic teachings whether Muslims pray in Synagogue in case of shortage of Mosques.
This experience impressed me so much about America and about its people. In America, people have respect for each other’s worship places and they welcome people belonging to other religions to use their worships premises. This was my first experience of such kind. I had never heard or seen such thing in the past.
This shows that if humans want to live in peace with each other, they absolutely can, despite their race, color or religion. Muslims have always been part of America and they have always been given religious freedom.
No matter how much you criticize America, you have to appreciate its greatness
in somethings for sure. Among those grate things which America carries is the
fact that in America children of Adam can be seen under one roof praying to
different Gods.

Salman Yousafzai Adds: After a few moments in the Epiphany Church at Washington the bells ring, the echoes of “Azan” commenced throughout the grand hall of the Church in Washington DC on
Friday.
It was amazing moment to see such a big
congregation of Muslims offering Friday prayers surrounded by Christian icons,
two religions were sharing the same space, it was something new for me at
least. Like me, Raheel Baig who was born and brought up in Alexandria Virginia
while sharing his feelings about offering first time Friday prayers at a Church
says “it’s amazing because there is coexistence and it is also wonderful to see that Christians are willing to allow Muslims to pray in their house of God”.
Raheel whose father belonged to Karachi said I would like to see Christians
also come to mosques and pray. “Christians open the doors for Muslim community, so Muslim also need to welcome them in mosques across the world” he
wished. We have one vision that God is one and other religions also believed on one God, so we need to be united, he said.

Dr. Muhammad Shafi belonged to Peshawar, a provincial capital of Khyber Pakhtunkhwa province of Pakistan said eight years back Friday prayers begun with fifty people in this Church but now it reached to 400 worshippers. “The Friday prayer congregation is the biggest congregation of this Church”, he claimed.
Dr. Shafi has been delivering Friday sermon every Friday in different mosques and Churches and he is offering his services free of cost.
Whenever we need places for prayer, the
officials of church and synagogues assist us and welcome Muslims to offer their
prayers in Churches.
He said there is shortage of mosques in United States as compare to population of Muslim community; however, we are thankful to them for their welcoming attitude toward Muslims. This act also delivers a positive message to the world. In Church, praying is kosher, he
informed.
Another worshiper Muhammad Ali who comes to this Church for Friday prayers from last six years said “It’s amazing, when I
hear the sound of church bells and Friday sermons together. It’s a moment of
likeness for people who think we are different. We are all the similar, he said.
I feel good when I see Muslims and Christians in unity, he added.
A Pakistani-American Shahid who is residing in USA since from last 35 years said that there were very few mosques in America when I came to USA for the first time in 1980s. We use to go to churches for Friday prayers. He recalled that for the first time when I went to church for
prayer in 80s there were huge number of policemen deployed in church to avoid
any untoward incident but nothing happened and everything went well. “We feel good to offer prayer in churches and residents in Alexandria even offer their
car parking free of cost to Muslims worshipers during Friday prayer” he said.
Farooq Syed has been organizing these Friday prayers since the Church of the Epiphany opened its doors to the Muslim
faithful who needed a place to worship eight years ago, “Sharing same space made people of different religions to understand each other and their
religions,” Farooq said.
As my colleague wrote above “no matter how much you criticize America, you have to appreciate its greatness in somethings for sure. Among those grate things which America carries is the fact that in America children of Adam can be seen under one roof praying to different Gods.