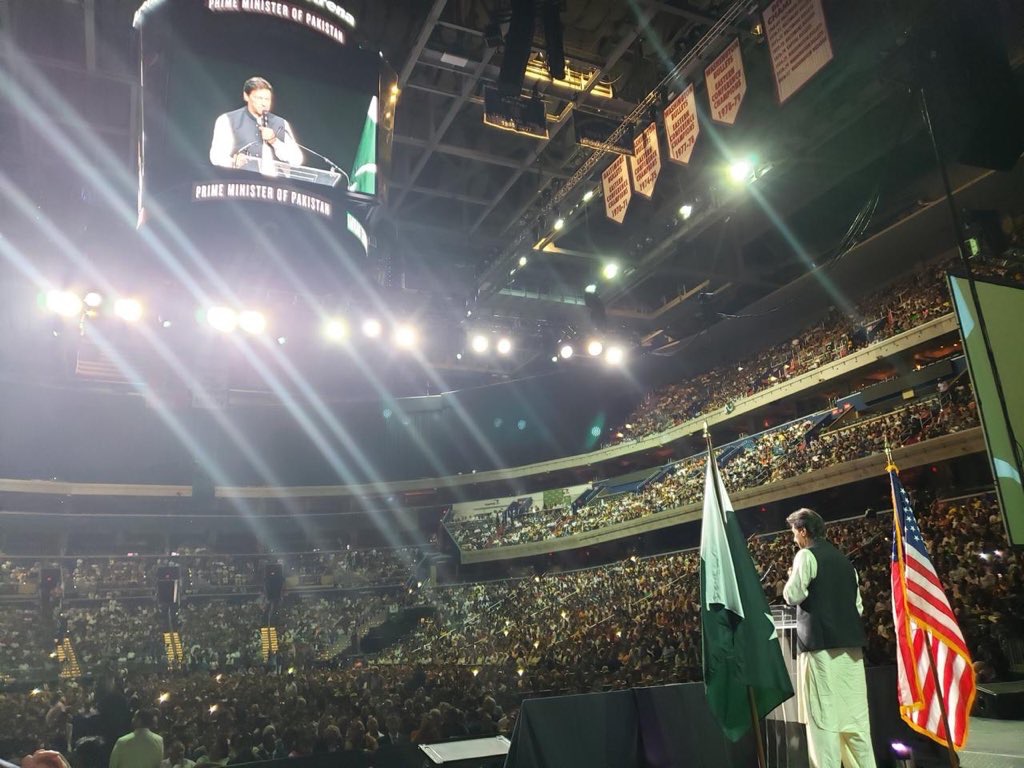 Washington DC: Prime Minister Imran Khan vowed that those who looted the country have to return the stolen wealth and only then they will be allowed to leave Pakistan or get released from jail. Imran Khan has also created history in America by organizing the largest gathering of expatriates. Imran Khan was addressing a gathering of more than twenty thousand Pakistani’s at Capital One Arena in Washington DC. The entire arena was full with Pakistani’s and flags of Pakistan.
Imran Khan said that the reason why democracies are successful is because there is meritocracy and people are not hired or promoted on the basis of their family links and contacts. Prime Minister Imran Khan said that Nawaz sharif, Asif Zardari, Maulana Fazl Ur Rehman and Anfandyar Wali Khan are all promoting family politics and are not in favor of seeing Pakistan being run on the basis of merit.
Khan said another best part of democracy is that rulers are answerable to the public and that is the reason why opposition don’t like him because he is asking them about the wealth they have stolen from Pakistani nation.
While taking a jab at the opposition, Imran said that they have only one agenda and that is to get NRO from his government. Imran promised that he will never give NRO to those who are responsible for bringing Pakistan in the financial miseries it is facing today. “Properties of the corrupt are being freezed and will be sold to get the stolen money back” Imran Khan assured the crowed.
Prime Minister Imran Khan said that in the current education system in the country the poor can never succeed and it is only the wealthy ones who are able to get good education and make their future bright. He vowed that his government will change the Education system in the country and will insure that there is one form of education in the entire country.
The prime minister said that educational reforms will also be made in the Madrassahs where most the poor children go to get both Islamic and modern education. Imran Khan urged the business community in Pakistan to submit their tax returns and become part of tax net because with out collection of taxes there is no country that can succeed. “All traders must pay taxes and after taxes are duly paid and collected, the country can get out of the debt trap” Khan said. Criticizing former rulers Nawaz Sharif and Asif Zardari, Imran Khan said that he will withdraw the air condition, private food and Tv facilities from them in jail because these kinds of facilities are not even available to ordinary poor Pakistanis.
Imran Khan said that he always believed that there was no military solution to bringing peace in Afghanistan. Imran Khan promised the crowed that he will not embarrass them by his meeting with President Donald Trump and nor will he read notes from a piece of paper when meeting the American President.
Foreign Minister of Pakistan Shah Mahmood Qureshi in his address said that expatriates work hard and send their money back to Pakistan whereas former rulers looted the country and sent their wealth out of the country.