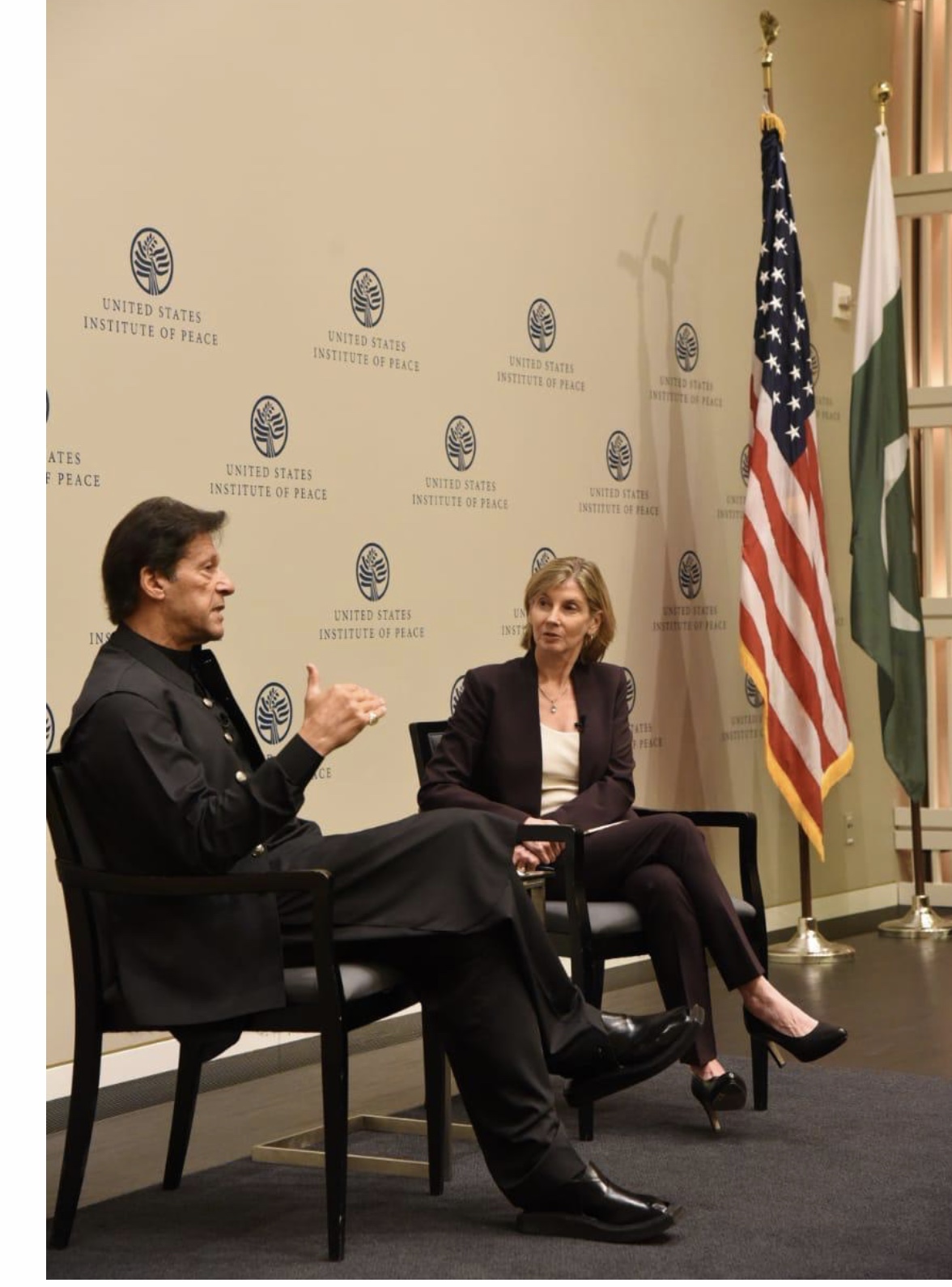 Imran assures not to interfere in internal matters of Afghanistan

Washington DC: Prime Minister of Pakistan, Imran Khan during his address at the United States Institute of Peace (USIP) stated that he will be meeting the Afghan Taliban delegation soon and assured that Pakistan will not interfere in internal matters of Afghanistan.

Imran Khan said that the US and Pakistan are on the same page with regard to Afghanistan and assured Pakistan’s full support in bringing peace and normalcy in the war-torn country. He further said that it is not an easy task to bring peace in Afghanistan as there are some countries which don’t want to see peace there but pressed that it is a doable task.

Addressing a packed audience at USIP, the Prime Minister said that he never felt more humiliated than when the United States came inside Pakistan and killed Osama Bin Laden. It was embarrassing in a sense that on one hand we were allies to the US and on the other hand we were not trusted and our sovereignty was put at stake, the Prime Minister added. In response to a question about what kind of relations Imran Khan would like to see with America, he said that our relations should be based on respect, mutual friendship and not transactional.

Prime Minister Imran Khan said that in the past Pakistan and US relations were transactional, meaning when Pakistan was needed, he was called friend and aid was provided but when he was not needed anymore, Pakistan was left to deal with situation on its own. While giving an example, he said that Pakistan was left behind by the United States after Jihad ended in Afghanistan and also after Osama Bin Laden was killed in Pakistan.

Pakistan suffered tremendously because of the US invasion of Afghanistan and because of being of an ally to the United States, Prime Minister Imran Khan said and added that “TTP started in Pakistan because of Pakistan sending its military to the tribal areas of Pakistan and that Pakistan should have stayed neutral after 911.” He further said that whenever military goes to civilian areas, human right violations happen and that Pakistan had sent these troops to the tribal areas under the pressure of America.

When asked about curbs on media, Imran Khan said that his government fully believes on the freedom of press. He also said that in his becoming the prime minister of Pakistan, social media has played the most important role. While referring to one particular media group, the Prime Minister said that “this one media group even supports a prime minister which is convicted on corruption charges. “This one media group even gets upset when asked about their tax returns” Imran Khan added. The Prime Minister did say that his government is working on improving the media watch dogs to make sure that fake news is not aired. “Media in Pakistan is even more free that UK and we will ask the media about their assets and income” Imran Khan added.

With regard to Iran the Prime Minister of Pakistan, Imran Khan said that “most people don’t understand the gravity and consequences of full-blown war with Iran.” He said that Iran is not like Iraq and if it is attacked all its neighbors including Pakistan will be severely affected. The prime minister once again gave an offer that he would love to play role of a mediator to ease tension between the US and Iranian governments.

With regard to militant groups inside Pakistan, Imran Khan said that it is in the best interest of Pakistan to get rid of these groups and to disarm them. He assured that his government will not allow any militant group to operate from Pakistani soil.

When asked about the difficulties NGO’s are facing in their registration, the Prime Minister said that NGO’s started facing these problems after the Shakil Afridi incident. He said that he runs two NGO’s himself and knows the importance of them but he said that “every NGO’s must go through the prescribe formality of the country they want to operate in.”

Prime Minister Imran Khan further said that the main focus of his government is on human development, equal education for all and collection of taxes. Dispelling protests by businesses in Pakistan, Imran Khan said that “without collecting taxes, no country can run and operate.”