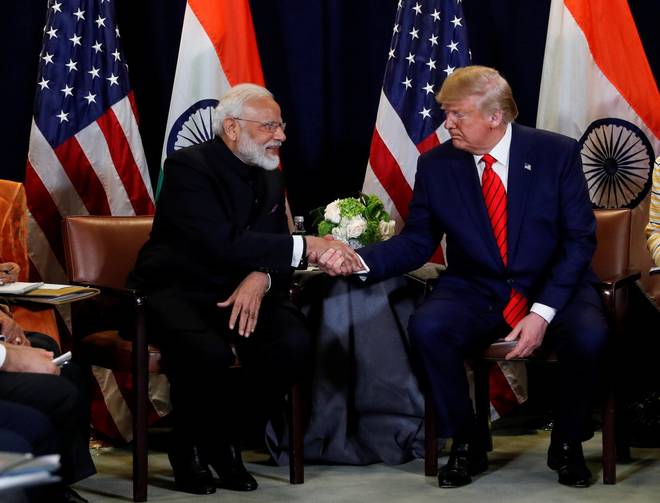 Jalil Afridi
Washington DC: While talking to the media before holding bilateral meeting with Indian Prime Minister, the US President while referring to Pakistan and India said that “ It would be great if they could work out something on Kashmir.”

The US President on two occasion mentioned the issue of Kashmir. In his opening remarks Trump said that during his bilateral meeting with Indian Prime Minister Narendra Modi, he will be discussing the issue of Kashmir. Despite several questions by Indian reporters accusing Pakistan of sponsoring cross border terrorism, the US president did not accuse Pakistan of such activities.

While referring to Prime Minister Imran Khan and Prime Minister Modi, the US President said that “I really believe that these two great gentlemen will get together and work something.”

While referring to his meeting to Pakistan’s Prime Minister, Imran Khan, the US President said that “I had a very good meeting with Prime Minister Khan. It was a long meeting and we discussed a lot. And I think he’d like to see something happen that would be very fruitful, very peaceful. And I think that will happen, ultimately.”

Instead of asking questions the India media kept on passing statements and accusations about Pakistan, to which President Donald Trump said that “Boy, you have great reporters. I wish I had reporters like this. You’re doing better than anybody I’ve ever heard. Where do you find these reporters? This is a great thing.“