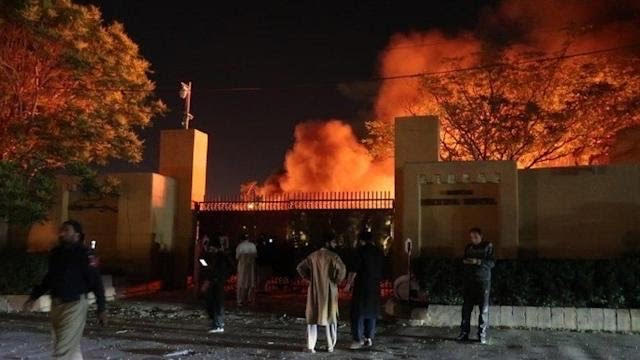 Washington DC: Both Pakistani and Chinese officials are confused over the blast which took place yesterday at Serena Hotel in Quetta. Sub Inspector Malik Manzoor Hussain wrote the FIR (First Information Report) of the terrorist attack on Chinese Consulate in Karachi last year. The said FIR is being read over and over again by embassies of different countries to see the similarities and differences between the two attacks. China seems to have ruled out the possibility of the involvement of Afghan side of Taliban or the Pakistani side of Taliban because they believe they have good relations with both of them. It is pertinent to mention here that Pakistan and China share counter terrorism strategy  therefore they both know that the aim behind these terrorist attacks is to sabotage Pakistan China relations. India involvement is also ruled out for the time being because China believes that India could not dare to attack their ambassador like this and that such behavior could cost India heavily. It is also important to mention here that though Sheikh Rasheed, the Interior Minister of Pakistan had denied the presence of Chinese Ambassador at Serena Hotel at the time of the blast but he did not mention whether the Ambassador was there earlier or not. Some Pakistani and Chinese security and intelligence officials continue to dig more information related to Serena Hotel blast where as others are busy in keeping up the fast approaching date of the withdrawal of the US forces from Afghanistan and its effects in the region. And of course this withdrawal will have effects on the interests of both China and Pakistan. A senior analyst while talking to The Frontier Post said that Russia should not be forgotten while discussing this whole region and that Iran is now a close ally of China who is investing billions into Iranian economy.