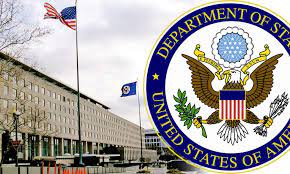 WASHINGTON DC: In a reply to query of The Frontier Post whether US has asked Pakistan for military bases, the US State Department official Alex said that “US President has said we must be organized to prevent the re-emergence of terrorist threats in Afghanistan, or anywhere else.”

The official further said that “we do not comment on private discussions.”
Washington DC is full of rumors these days that America has asked Pakistan for military bases offering a large amount and that Pakistan is reluctant to do so due to anger from China.

A senior journalist in Washington DC while talking to The Frontier Post said that “it is very interesting to note the silence of Pakistan over US withdrawal from Afghanistan” The said journalist wondered why Pakistan is not raising hue and cry over the US withdrawal. “Who is going to handle things in Afghanistan, which neighboring country will be the most effected and what if Taliban movement enters Pakistan again” were the kind of questions raised by this senior journalist working for a US government owned media organization.

A government official of Pakistan while talking to this scribe said that “cross border infiltration and other government functionaries would have been managed better if tribal areas of Pakistan were merged into a separate provinces instead of merging these areas in Khyber Pakhtunkhwa province. “IG police sitting in Peshawar can not handle things in Landikotal and Wana” he further added.

When asked an Indian journalist in Washington DC about the current situation in Pakistan and Afghanistan, he said that “India is fine with having lesser role in Afghanistan as long as Pakistan plate is full of messy matters.”

While talking to a senior analyst he said that “If Pakistan agrees to give bases to America, not only will China be upset but also the Taliban will be very upset as well, he added.