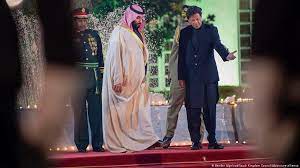 WASHINGTON DC: Mr Khalid Majid, Council General of Pakistan in Saudi Arabia through his letter number CG-1/2021 dated 26th May has informed the Foreign Office about details of gifts presented by Saudi officials to the Pakistani Prime Minister Imran Khan and members of his delegation.

According to details the Saudi Crown Prince on 8th May at Ritz Carlton hotel had presented a “hand carry bag containing seven packets for Begum Sahiba” which were handed over on spot to Wing Commander Khurram Javaid ADC to the Prime Minister.

Governor Madinah on the same day at Hilton Hotel presented 37 gift pieces along with ten boxes of Zam Zam water. Out of these 37 gifts, 12 pieces were handed over to Ministry of Foreign Affairs Protocol Officer, Mr Umair who loaded them in the prime ministers aircraft. The remaining 25 pieces were handed to DCP (V-11) to the Ministry of Foreign Affairs.

Similarly Secretary General of the OIC and Imame Kaaba had presented some gifts which were handed over the official of Foreign Office.

Maulana Ashrafi, who is Special Assistant to the Prime Minister was also part of the delation, made himself part of this letter because he had opened one box of Zam Zam water and shared it with the delegation.

According of the letter lots of Zam Zam water was left behind due to excessive baggage and is in the custody of the Council General.