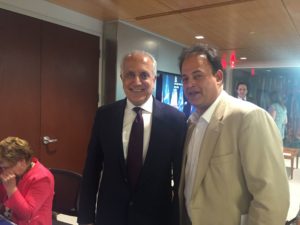 Pakistan’s sacrifices for Afghanistan have not only been unrecognized since last thirty years but instead they are tamed as cause of destruction for Afghanistan and that is what one feels while reading the book of former US Ambassador to Afghanistan, Zalmay Khalilzad. Zalmay’s book titled ” The Envoy” was launched in Washington DC at the Atlantic Council, where Indian Ambassador to America, Arun K. Singh was sitting in the front row. While reading this book i also realized that there probably has never been a more senior Afghan American official in the US government. Zalmay Khalilzad has been involved in the Afghanistan affairs on behalf of the US government since the invasion of Afghanistan by the Soviets.
Pakistan is discussed on thirty two different pages in Zalmay Khalilzad’s book but not once has there been some thing good mentioned about Pakistan or its policies towards Afghanistan.
At the very start of his book when Zalmay talks about Soviet invasion of Afghanistan and Zia Ul Haq toppling Zulfiqar Ali Bhutto government, he talks about his visit to Pakistan as US government official and said “never had i seen officials tell flat out lies to their American counterparts so frequently and with such impunity.”
Regarding Gulbuddin Hekmatyar, a leading political figure of Afghanistan from that era till today, Zalmay writes that “Hekmatyar had not won any significant battles against the Communists forces. He was expanding at least as much effort fighting rival resistance leaders as he was waging battle against the Soviets.”
Zalmay when talks about why Pakistan was supporting Hezbe Islami of Hekmatyar writes that “I could now see that Pakistan had several problematic motives for backing the Islamists. Zia wanted to control the Afghan resistance movement. Zia wanted to settle Pakistan’s long-standing border dispute with Afghanistan.”
During Soviet invasion of Afghanistan when millions of Afghans migrated to Pakistan and the people and government of Pakistan extended all out hospitality to them, Zalmay Khalilzad shared a negative view about these efforts of Pakistani nation as well. He writes “Even my gratitude for the fact that Pakistan had accepted so many Afghan refugees dimmed after the visit. I am still haunted by the images of Panya Camp in the northwest frontier province of Pakistan, where 80,000 Afghan refugees making do with just 250 tents and 1000 blankets… Yet it became clear to me that Pakistan was exagerating the cost and burden its government was bearing. In fact Pakistan seemed actually to be profiting from the rise in the real estate prices.”
Zalmay Khalilzad book is all about historic events which took place in Afghanistan, Pakistan and the United States. Zalmay while referring to late military dictator Zia Ul Haq writes “In August 1988 during one of trips, the US Ambassador to Pakistan, Arnold Raphel suggested that i meet Zia. I was supposed to join Raphel and Zia on a flight to a military base in Punjab. Just before the scheduled departure from Islamabad, however Raphel changed his mind. Instead, he wanted me to go to Peshawar to meet the Afghan leaders. …The plane carrying Zia and Raphel had crashed…There was initially some confusion in Washington about whether i was on the flight…Conspiracies theories about the crash abounded. I shared the widespread fear that Zia’s death would unravel Pakistan. However, with US encouragement, elections were held, and Benazir Bhutto emerged victorious.”
After the Soviets withdrawal from Afghanistan, Zalmay writes that he had meetings with King Zahir Shah to bring him back to Afghanistan and play some sort of symbolic role in forming a government. Zalmay writes that “with Soviets on their way out of Afghanistan, the United States needed to plan for a new government in Kabul. I wanted to find a way to ensure that extremist leaders in the Afghan resistance, backed by Pakistan would not become the dominant force in post Soviet Afghanistan.”
While reading this book one wonders where and how Zalmay has developed the negative impression and disliking for Pakistan which started from the early eighties and all the way up for next two decades. Zalmay did not even mention anything nice in his book about Pakistan when his own parents were living in Pakistan.
In the next pages of his book, Zalway talks about how the next Ambassador to Pakistan at that time Robert Oakley and the CIA station chief in Pakistan, Milton Bearden did not like or agree to Zalmay’s point of views towards Pakistan and was eventually called back to Washington.
Zalmay writes in his book that the United States did not do well to the tragic aftermath of Soviet Afghan war was avoidable and that the United States did not adjust in a timely manner. He writes that after the Soviets withdrawal the US should have worked toward forming a broad based transitional government instead of supporting Pakistan’s preferred option of a military solution.

Zalway was not kept away from Afghanistan and Pakistan for too long and just after a few years he was assigned tasks with regard to the that region. After the Soviet withdrawal, according to Zalmay civil war erupted in Afghanistan and the United States remained neutral. Zalmay talks about his efforts to convince former king Zahir Shah to convey Loya Jirga. During his meeting with King Zahir Shah, the author mentions how at one time he talk him “how can you sleep at night when your people are in this situation. It was during these time that Zalmay helped Hamid Karzai become a political figure of Afghanistan. Zalmay writes about how he arranged karzai’s meetings in Washington DC, travel arrangements to Uzbekistan (to meet Ahmed Shah Masood), Rome and else where to make him an important figure in Afghan political arena. ” Zalmay quotes President Bush as saying at “I want you to turn Karzai into a great politician.”
While writing about one of his meetings with Pakistani officials Zalmay writes that “I sat in on a meeting between Rice and Pakistani foreign minister Adbul Sattar. Rice pointed out that Pakistan’s Taliban allies were harboring al Qaeda and other dangerous groups. Incredibly Sattar denied that any terrorist bases existed at all. I found it troubling and revealing that Sattar felt at liberty to speak not just for Pakistan but also for Afghanistan.” Regarding his separate one on one meeting with Abdul Sattar, Zalmay writes that “What the hell are you doing denying all of this stuff.” In the next few pages Zalmay talks about how influential Pakistan was in the affairs of Afghanistan during the Taliban rule by being “the only country with an embassy in Kabul.”
Writing about post 911 events Zalmay writes “Washington’s emphasis on targetting high value al Qaeda targets in Pakistan was enabling Islamabad to play a double game. While cooperating with the United States on counter terrorism, Pakistan continued to support the Taliban, Haqqani network and other insurgents. Pakistan’s persistent efforts to destabilize Afghanistan were deeply rooted in Islamabad’s paranoia about India. Pakistan leaders believed, wrongly, that India was gaining a dominant position in Kabul.”
While reading this book, i was thinking whether it was Zalmay Khalilzad who facilitated India and gave them access to every nook and corner of Afghanistan. Even during the book launch a journalist asked Zalmay whether it was legitimate complaint of Pakistan that India has built consulates in different parts of Afghanistan where there are no business activities of Indian businessmen and that the only task given to these Indian consulates was to train, finance and facilitate terrorists to carry out destruction on Pakistani soil. Zalmay replied in negative to this question of the journalist.
Another interesting thing which i learnt while reading this book was the fact that Taliban were intentionally pushed from Afghanistan into Pakistan and it was done in an organized and well planned manner. Zalmay Khalilzad accepts this fact by writing that “The Taliban had been scattered and pushed into Pakistan, but it had not been vanquished. The United States had not found a way to counter insurgent sanctuaries in western Pakistan. I had raised the issue repeatedly as had Karzai. I wanted additional pressure on Pakistan. He further writes that “by the spring 2003, Pakistan double game was undeniable.” Zalmay also talks about his meetings with President Musharraf and mentions how Musharraf on several occasions had mentioned the Indian consulates in Afghanistan. Musharraf had also complained about the construction of a dam on Kunar river and the under representation of Pashtuns in Karzai’s government. While talking about one of his meetings with President Musharraf, Zalmay writes “I then turned to the issue of the Taliban and insurgent sanctuaries. ..Musharraf shifted in his chair, visibly uncomfortable with the turn in our conversation. There are no Taliban in Pakistan, he said. Indian intelligence services were feeding misinformation to the Afghan government and from there to the United States. I did not relent. The Taliban’s political leadership was in Pakistan, i said. Even journalists were able to find Taliban leaders and spokesmen in Pakistan.”
In his book Zalmay did not feel shy in writing that Pakistan is becoming a fail state. It is a sad irony that despite years of sacrifices and generosity by Pakistani people and its government, none of these things are appreciated on international level. It was also a fact that it was through the policies of Zalmay Khalilzad where fake leadership was created in Afghanistan in shape of Hamid Karzai who did not deliver Afghanistan any good. Looking back at US Afghan policy it is a reality today that whatever policy guidance provided by officials such as Zalmay Khalilzad proved as complete failure. Today, the Taliban still enjoy ruling most parts of Afghanistan and are in negotiation process with countries like Pakistan, China and the United States regarding their role in Afghan government.
During the questions and answers suggestion i did ask Zalmay Khalilzad about why an unknown and corrupt leader like Hamid Karzai was chosen to lead Afghan government and that not only for one term but for two terms. Zalmay Khalilzad termed my questions as good and did not give any good replies to the questions i asked.
There is no denying to the fact that this book is worth reading especially for those who are interested in politics of Afghanistan and US foreign policy strategies

« Lobbying begins against Saudi Arabia
US saddened by Edhi’s demise »