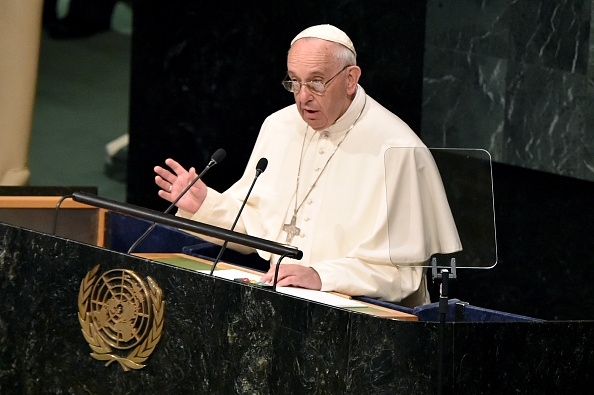 New York: Pope Francis urged the world leaders who gathered at the United Nation to take concrete steps towards improvement of the environment and to stop being “selfish”  and stop destruction of the environment on emergency basis.

The speech to the 193-member U.N. General Assembly expanded on themes Francis has already discussed during his whirlwind trip to the United States and Cuba. His visit to the United Nations is the fifth by a pope.

Speaking in Spanish, Francis greeted the citizens of all the nations represented in the hall before addressing the global dangers of unlimited power.

The U.N. was created after World War II, at a moment of history “marked by our technical ability to overcome distances and frontiers and, apparently, to overcome all natural limits to the exercise of power,” he said. The U.N. was created as a response to technological power that, “in the hands of nationalistic or falsely universalist ideologies, is capable of perpetrating tremendous atrocities,” he added.

“The U.N. founding charter is based on the development and promotion of international law,” Francis said. “The limitation of power is an idea implicit in the concept of law itself. … No human individual or group can consider itself absolute, permitted to bypass the dignity and the rights of other individuals or their social groupings.”

On the environment, Francis said Christians and other religions believe man is supposed to take care of nature. “He is not authorized to abuse it, much less to destroy it.”

Environmental destruction goes hand-in-hand with injustice, and is a result of a system that is too focused on material wealth, Francis said.

“A selfish and boundless thirst for power and material prosperity” that misuses natural resources and degrades the environment also leads to social ills by excluding those who are physically, economically or politically weak, he said. “Economic and social exclusion is a complete denial of human fraternity and a grave offense against human rights and the environment.”

Francis also discussed the need to address other “scourges” of the world. He called for the elimination of nuclear weapons and urged world leaders to work “toward the complete prohibition of these weapons.” He praised the Iran nuclear deal reached through diplomacy, and said he hopes it will last, “with the cooperation of all the parties involved.”

He spoke of “military and political interventions not coordinated with members of the international community,” singling out the strife spreading across the Middle East, where the radical Islamic State has been growing and warring against governments across the Arab world and North Africa.

“I must appeal to you regarding the painful situation in the entire Middle East and North Africa where Christians and even members of the majority religion have been forced to witness the destruction of their places of worship, places of cultural heritage,” Francis said. Many of those people are “paying for their religious belief with their own lives or though slavery,” he said.

He scolded the assembled delegates that in response their reaction “has to be more than drawing up lists of strategies and disagreements.”

“The international community should do all it can to stop and prevent systematic religious violence against ethnic and religious minorities and to protect innocent peoples,” he said. Similar attention needs to be given to conflicts in Syria, Ukraine, Iraq and parts of Africa, he said.

He urged world leaders to put aside partisan and individual interests to seek the common good and benefit ordinary men, women and children who suffer the most from the poverty, conflicts and misdeeds of the world.

Missing from the pope’s address was the topic of Europe’s growing migrants crisis, which he was largely expected to address head-on. Addressing Congress in Washington on Thursday, the Argentine Pope described himself as the son of immigrants addressing a nation of immigrants as the world faces the worst refugee crisis since World War II.

Future generations should be taught that “to live as nobly and as justly as possible,” they should “not to turn their back on our neighbors,” he told lawmakers. Immigrants should be viewed as persons, not numbers, and treated in a way that is “humane, just and fraternal,” he added.

Before the pontiff’s address Friday, U.N. General Secretary Ban-Ki Moon thanked Francis “for demonstrating once again your remarkable global stature as a man of faith among all faiths.”