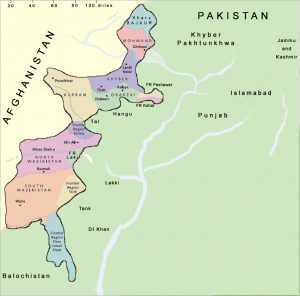 FATA needs a Province
Comment By: Jalil Afridi
Advisor to Prime Minister of Pakistan on Foreign Affairs, Sartaj Aziz had sent his article to The Frontier Post yesterday which was duly published on the front page. The title of Mr. Sartaj Aziz article was “History of Fata Reforms.” It is pertinent to mention here that Mr Sartaj Aziz, besides being advisor to the Prime minister on Foreign Affairs is also the Chairman of the four members Committee which led the Fata Reforms agenda and just a few days ago, was able to pass its recommendations from the Cabinet. The gist of these recommendations pertained to the merger of Fata into Khyber Pakhtunkhwa province and amending the Frontier Crime Regulations (FCR) to something which is not yet known but has a word “Riwaj” in it.
I wonder why the prime minister did not choose some body from the tribal areas to lead this committee. I also wonder whether it was fair that only four members Committee was formed to decide the fate of millions of people living in tribal FATA. I hope that the Prime Minister is aware of the fact that FATA is a place where the largest migration of humans within a country took place better known as Internally Displaced People (IDP’s). And FATA is a region where drones have been dropping since a decade, where the largest number of foreigner terrorists have been killed, where thousands of Pakistan Army jawans have been martyred and where billion of Rupees worth of corruption is done every single day; to decide the fate of such area and its people, four individuals including Sartaj Aziz were appointed by the Prime Minister. What a pity?
It is also pertinent to mention here that the cabinet decision with regard to Fata Reforms has already been challenged in the Supreme Court by prominent Malik’s belonging to different agencies of the tribal areas.
Mr. Sartaj Aziz article mostly relates to the how the whole process of FATA Reforms started many years ago, therefore I am only going to comment on few of his important quotes which are basically related to this actual reforms which the present cabinet just approved.
Mr. Sartaj Aziz stated in his article that “the Committee also carefully examined the option of a separate province for FATA but concluded that it was not a feasible option.” I completely fail to understand how such a great idea can be dropped by writing two vague lines which does not say anything or give any logic.

In the next paragraph, Mr. Sartaj Aziz wrote that “the economic and cultural links between the Agencies and districts are fully strong but not among the FATA agencies.” There is nothing more untrue than this statement. Economic and cultural links between the tribal areas have been historically very strong and very similar. But this fact is known to those who belong to FATA or those who have been living next to FATA. You cannot expect an average person from Lahore and Karachi to know this fact. I recall when FATA started becoming a playground for international players in year 2004, not many people from the rest of Pakistan were aware of the different parts of FATA. I remember at lawyer friend of mine from Lahore once asking me how far the city of Afghanistan, Miranshah was located from Pakistan.

Mr Sartaj Aziz also wrote that “FATA does not have the financial resources or the administrative capacity to manage a separate province.” Let us just be honest with each other. Is there is any 18-grade officer in Pakistan who makes more money than a political agent of a Tribal Agency? Is there any food inspector, tehsildar or custom officer or any SHO who makes more money than these same officers posted next to a Tribal Agency? Is it not true that millions of Dollars’ worth of trade is done every day through, Chaman, Waziristan, Torkham and other parts of FATA? Is it not true that millions of Dollars are made by different corrupt officers from the drugs pouring in from Afghanistan? What financial resources are Mr. Sartaj Aziz talking about? FATA can sustain itself from the trade done with and through Afghanistan and from the natural resources which lies in its mountains.
The few things which needs to be done for FATA are, direction, security, assistance and a separate province. The rest will happen so great that the people of Pakistan will compare trade zones of FATA with those of CPEC in Gwadar. Tribal Areas of Pakistan are the gateways to Afghanistan and Central Asia. All the multinational companies which are based in Pakistan are well aware of this fact and are cashing on their products and goods. I wonder why the Prime Minister did not include individuals like the CEO of Engro Corp, Nestle, Pepsi, Shezan, Lucky Cement, Honda, PSO, Shell, Haier and many more in the Reforms Committee on FATA. These people would have definitely made wiser decisions with regard to FATA.
Beside the security situation with Afghanistan which should of course be the responsibility of Pakistan Army, there is no other logical reason why not to turn FATA into a separate province, having its own governor, chief minister, police department, property tax, excise, customs, forest, minerals, agriculture, education, health and all the other government departments and functionaries including toll plazas for international trade and travelling.

The following comments of Mr. Sartaj Aziz are my favorite, he wrote that “the demand for abolishing the FCR, a legacy of the colonial era, was widespread and virtually unanimous. But many tribal elders wanted their traditional Rewaj system of justice through Jirgas to continue because the court system in Pakistan, they said, was time consuming.” Now this comment of Mr. Sartaj Aziz is worth writing a book about. On one hand Mr. Sartaj Aziz is saying that the tribal elders wanted their Rewaj of their Jirga to continue and on the other hand he wrote that the court system is Pakistan is time consuming. How about introducing the Jirga system in entire of Pakistan? Why not give a benefit of Jirga system to the whole country? People in Pakistan are indeed aware of the time-consuming process in judiciary. I am sure Mr. Sartaj Aziz being a Pakhtun knows that Jirgas are held all over KP province, Balochistan and even in the provinces of Punjab and Sindh. Legal rights and Jirgas should not be confused with each other. Whatever legal rights any Pakistani citizen has in any part of the country should be given to every resident of FATA.

In present scenario, there is no better option than turning FATA into a separate province. The only alarming situation is the border situation with Afghanistan, which can be easily solved by Pakistan army and the people of FATA. At present, it is only the army which is fighting the war on our border whereas historically and in realty no wars can be won without the support of the citizens. The people of FATA needs to be standing right behind their Jawans in FATA, and not living in some tents in Noweshera or Swabi. The people of FATA needs the hope of life, happy and future; which they have lost since a decade. Keeping in view the presence of international players in Afghanistan and the hostility from India, the people of FATA are at a great risk of becoming foreign adversaries of its own people and its own country.
The reason why India became so close to Afghanistan in the last ten years is because India could visualize using the borders of FATA to achieve its goals while realizing the similarities between the people of Afghanistan, FATA, KP and Balochistan. FATA is very much the juggernaut on which the security apparatus of Pakistan lies upon. Pakistani rulers should not play anymore with the lives of the people of FATA and risk the security of Pakistan. Just to benefit a very few rulers and bureaucrats millions of FATA residents are put into agony. Beside creation of a separate province of FATA there is no other viable solution to achieving long lasting security and economic well-being of Pakistan and the people of FATA.