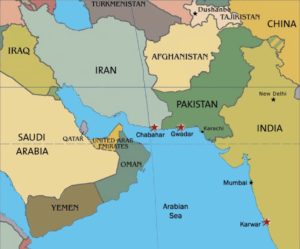 Who could have thought that one day United States would sponsor a resolution at Financial Action Task Force (FATF) to place Pakistan on the list of countries that financially aid terrorism.? Despite giving land routes, air bases, handing over thousands of Taliban and Al Qaeda leaders, sacrificing the lives of seventy thousand Pakistanis in terrorism related incidents and losing billions of dollars in economic terms, Pakistan still has not been able to win the heart of the American government. Ironically, this time around Pakistan seems to be not much bothered by the shift in US policy either and is putting all its confidence and reliance on China. Beside Pakistan, America and China the other four nations which are making the regional politics very uncertain are Afghanistan, India, Iran and Russia.

Russian Foreign Minister, Sergei Lavrov during a press briefing said that “we are very preoccupied by what is happening in Afghanistan and by the expansion and influence of the militants of Islamic State (IS).” The foreign ministers statement reminded me of my question which I had asked during Pentagon press briefing on October 27, 2017. Pentagon’s Chief Spokesperson, Miss Dana White along with Staff Director, Lt General Frank Mckenzie while replying to my question stated that they are not aware of the increasing number of IS fighters in Tora Bora area of Afghanistan. Pakistan Army Chief General Qamar Bajwa while addressing the recently held security conference in Munich also mentioned the increasing influence of IS fighters in Afghanistan. Looking at these three statements by the three of most important office holders of their respective countries make the situation very uncertain and dangerous.

In another important development, the President of Iran, Hassan Rouhani visited New Delhi. He met Indian Prime Minister Narendra Modi and signed the agreements including Tehran leasing to New Delhi operational control of part of the Iranian east coast port of Chabahar for 18 months. Indian analysts are trying to compare Chabahar Port with Gawadar Port. India on one hand is the strategic ally of America but on the other hand it is building relations with the soft enemy of America, Iran. Some opinion makers from Pakistan believe that Pakistan should be more concerned about the negative role of Iran instead of India when it comes to the internal happenings of Pakistan and Afghanistan. They believe that in coming days Iran will be able to assert more influence on Pakistan especially keeping in view the decision of Pakistan to send its military to Saudi Arabia. Some analysts also believe that the purpose of building the Chabahar port was never meant for trade purpose whereas the real goal was related to security and war tactic. For China, Gawadar Port is of utmost importance and many of their future dreams are connected to it. China is taking every step possible to make this dream of theirs come true and that is the reason why China is not even shy in talking to the Taliban leadership in Afghanistan or some Baloch insurgent groups in Pakistan.

In another scenario, Russian influence is also increasing in Afghanistan and better relations are also building between Pakistan and Russia. Though relations seem very unnatural and conflicting amongst different nations in South Asia but one fact which is easily predictable is that now a day’s countries are building their relations with one another on the basis of each issue and each conflict instead of in totality. In simple words relations are based on tit for tac instead of long lasting relation in both thick and thin times.

The two major players which are prone to internal political crisis are Pakistan and Afghanistan. Both Pakistan and Afghanistan have political leadership which are incapable and corrupt at the same time. Pakistan has a dummy prime minister in shape of Khaqan Abbasi. He came into power when his own party head and former prime minister Nawaz Sharif was removed by the Supreme Court of Pakistan on the charges of corruption and holding a work permit from his son’s company in Dubai. On the other hand, Afghanistan has a government which is created by foreign powers in totality. President Ashraf Ghani and Chief Executive Abdullah Abdullah of Afghanistan hate each other guts but they are united under the umbrella of America. Despite US increasing the number of its troops in Afghanistan, the situation in the country keeps on detreating by each passing day. Corruption and the menace of black money earned through opium trade are the two-major source of income for the influential and decision makers of Afghanistan. Different forces have been successful in ruining the once brotherly relations between Pakistan and Afghanistan. Both the countries point fingers at each other whenever terrorist strike takes place. India and Afghanistan are bent upon ruining the relations between Pakistan and America. Although in a report recently submitted to the US Senate Intelligence Committee stated that US should not push away Pakistan to an extent where Pakistan finds new friends for long time and that such a move will decrease the American influence in South Asia. Year 2018 has many surprises for South Asia. Let us hope these surprises are for the good and for the peace of the region and not for the destruction and instability.