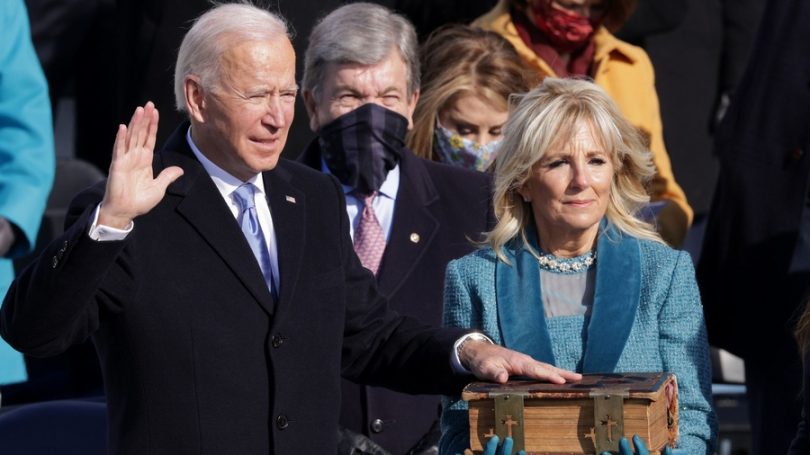 WASHINGTON DC: 46th US President Joe Biden in his inaugural address said that today is the day of Democracy.

Joe Biden said that there is a lot to heal and achieve and that my win is the win of an ideology. He said American is facing racial discrimination, white supremacism and domestic terrorism. He said that America will unite and will defeat division. “But this is not new in America to face challenges and will be successful in this challenge” he added.

He said if we act as United America we will not fail. He said that Neighbors must be respected. He said that political differences should not create a war like situation in the country.

He said we should remember the teachings of Dr Martin Luther King and thankful today America has the first African American female Vice President by the name of Kamila Harris.

President Biden did not mention former president Trump in his speech, but did taunt his policies of lying, attacking the Capitol Hill, racial divisions and creating religious disharmony.

“American has been tested before and America has risen to the challenge,” Biden said. “Democracy has prevailed.”

Biden vowed to “confront domestic terrorism,” and quoted President Abraham Lincoln to help “bring America together and unite our nation.”

Trump, breaking with tradition, did not attend his successor’s inauguration.

“This is a great nation. We are good people.” Biden said. “But victory is never assured.”

Biden directly addressed Trump’s supporters and asked them to “hear me out” before vowing to be “a president for all Americans.” “We must end this uncivil war.”

A moment of silence was observed for those who lost their lives in Corona. President Biden said that Corona has effected America in many ways and there so much to do. He said America must rise against the occasion and must write a great chapter in the history of America.

Strict security measures were taken all around Washington DC. State Department issued press card did not hold any value to the Secret Service department officials who were taking care of the security measures and many foreign journalists were unable to attend the event.

US President Biden said that America must have faith in hope and healing. Democracy, hope and justice must be the beacon to the people of America, he added.

After the speech, Biden will return to the White House, where he served as vice president just 8 years ago, with 15 executive orders, awaiting his presidential signature.

His flurry of executive actions is the start of an ambitious agenda to reverse Trump’s policies from energy to energy, banning drilling in the Arctic National Wildlife Reserve and wiping to a travel ban from mostly Muslim countries that Trump imposed on his first weeks in office.