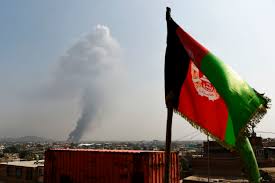 Zalmay Khalilzad pace of work has certainly slowed down and as a consequence Taliban’s have increased their attacks and the new player in the arena is ISIS.

A small time journalist like me knew three or four years ago that ISIS presence was growing in Afghanistan but when I asked Pentagon and its General about it during a press briefing, I was told “we are not aware about this.”

Pakistan on the other hand is influential in Afghanistan but I feel that the game is now out of its hands as well. Pakistan certainly can influence some groups but not all of them.

Countries like America, China, Russia, India and Iran are equally important in this battle over Afghanistan. Some of them are calling it emanating terrorism; some are calling it war over natural resources whereas others are calling it strategic location. In all of the above cases, the people of Afghanistan are the ones who are going to suffer the most as in the past. When the giant elephants will fights for their interest, it will be the “grass” that will again suffer the pain and bear the loss.

China factor, the OBOR, reviving the old Silk Route is definitely a big factor in Afghanistan and so is the Russian desire to excel its industry in the region including Afghanistan. China and Russia seem to be the real challenge for America in Afghanistan. It’s not Pakistan anymore. And it’s not India either who spent billions of dollars in Afghanistan but was unable to gain the trust of Afghan people.

For China the only issue of concern is the radicalization of Chinese population in some parts. But I don’t believe China can stop that. China has to learn to cope well with other religions and opinions. And the sooner it does that the better it is for the economic visions of Xi Jinping.

America is recovering from the mess that Donald Trump created and this will obviously take time. America is no mood of adventures at the moment and its only aim is to recover internally. Inwards thinking, reviving friendships, dolling out money and economic revival are the main issues that Joe Biden is facing and he does not want to lose concentration on these issues.

Iran, its ports, its oil and its religious sect are the key points between Afghanistan and Iran. Sometimes Iran uses these points in a positive manner and sometimes its aim is just to keep Afghanistan the way it is and to not let it prosper and be peaceful.

Now the real challenge is for the Afghans to agree among themselves and to learn to stand on its own. Afghans must come with a solution of their own choice. In Pakhto language there is a saying that “idiots make their guests the head of the house.” All the countries discussed in this article are guests in Afghanistan. They don’t care or love Afghanistan, the way Afghans do. These guest countries don’t care about the future of Afghanistan, they have their own interests.

An interim government is one suggestion which was floated during the peace talks on Afghanistan, and I don’t think it’s a bad idea. Ashraf Ghani cannot be thinking that he is the real president of Afghanistan. He knows he is the president because of US blessings otherwise he cannot get more than one hundred votes in elections in Afghanistan.

A real Loya Jirga needs to be constituted immediately which comprises all factions of Afghanistan. An interim government should be set up till a new, fair and free election is done. Guest countries in Afghanistan should be requested to help in peace and security. Afghans need to find a solution to their home. Decades of war in Afghanistan has left not a single house without a sad story.

For a happier and prosperous Afghanistan, factions within Afghanistan need to come together and finally call it enough. Enough of war. Enough of killing. Afghanistan must learn to stand on its own. Let the people of Afghan be free again, let them exercise their rights to choose and live freely just like other human beings.