What a joke is being played with the people of this country? A declared dishonest and corrupt former prime minister is driving around this country with government protocol and telling people that five judges of Supreme Court have stolen their mandate and asking if they will stand up to these judges. What kind of message is being given to the two hundred million people of this country?
I am surprised that the honourable Supreme Court has yet not taken action against the current Prime Minister, Mr Abbasi for providing government machinery, resources and protocol to Nawaz Sharif. The honorable Supreme Court might not be taking action because it does not want to destabilize the system or create a tussle between the two organs of the state. But the honorable Supreme Court must have faith in the people of this country. The people of Pakistan wants to see justice and that’s all. Justice is what lacks in this country. And now when there is a ray of hope that the Supreme Court of this country has given to its citizens, then it must continue to do so, with out any hindrance or doubt.
The people of Pakistan have been seeing the worse kinds of death, hunger, unemployment, injustice and sufferings for the last seventeen years. And they have lived through it. Now the only desire and wish they have is to see justice. Justice across the board.
The way Mr Nawaz Sharif is making mockery of the Supreme Court of Pakistan and the manner in which he is provoking the public should not be allowed at any cost. It will be a great joy for the people of this country to see Nawaz Sharif and Prime Minister Abbasi to appear in contempt of court and other relevant charges at the earliest infront of the Supreme Court of Pakistan.
Nawaz Sharif while addressing his supporters said that “only the people should kick out those they vote into power”. Are you joking Mr Nawaz Sharif? Are you trying to teach us some different form of democracy or are you out of your senses? It is the judiciary that decides whether somebody is innocent or guilty and honest or dishonest. The judiciary of this country has decided that you are a dishonest person and that corruption cases should be filed against you. What is so difficult in understanding this? Now you are out of prime minister house and removed from you party therefore do whatever politics you have left in a respectable manner. And face the courts.
Some of us believe that there is nothing wrong with this rally of Nawaz Sharif and he should be let loose to face his own political death. There is nothing wrong with having this belief but this should not happen at the cost of humiliating the judiciary and the involving the Pakistan army into politics again.
Politics does not mean provoking supporters of one political party to stand and insult another pillar of the state. Politics and democracy should be let loose to learn and grow but citizens should not be provoked to fight and kill each other.
Nawaz Sharif is heading this country and its citizens towards disaster and this must be stopped at the earliest. Prime Minister of Pakistan, Mr Abassi should run this country honestly and for the betterment of its citizens. He should not allow tax payers money be spent on his party’s political activities. And above all he should stay away from a gentleman who is declared dishonest. Pakistani people are behind their judiciary, their armed forces, their media and their democracy. No more jokes should be made with their future. 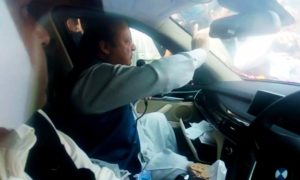